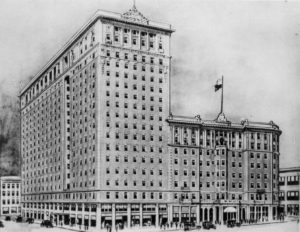 The King Edward Hotel topped by the Crystal Ballroom, circa 1923.

In 1900 George Gooderham—the richest man in Toronto, founder of the Bank of Toronto, CEO of the Gooderham and Worts Distillery as well as builder of the famed Flatiron building at Church and Wellington—had a new idea.

New: check out this video!

He would build the finest hotel money could buy to rival anything the European continent had to offer. And it would out shine any other hotel in North America.

His new hotel was dubbed “the King Edward” and opened May 11, 1903. The city had never seen anything like it. An advertisement of the day read, “It affords the man of moderate means without a mansion in which to entertain, a charming resort for a dinner, a ball, or whatever function he may desire while to the women it is an absolute boon.”

In the official opening day booklet a whole chapter was dedicated to the art treasures alone. The objets d’ art made the hotel such a popular a site-seeing stop  that one critic of the day said “The King Edward Hotel is to Toronto what the Alhambra Palace is to the city of Grenada, Spain.”

However with the death King Edward himself in 1910 the opulent age he gave his name to came to a devastating end. The world was soon at war, resulting in a new world order, one where the ruling class no longer held absolute dominion over everyone else. The King Edward hotel—once the centre of Toronto’s elite class—was going to have change its ways if it was to survive.

In the years following the war the hotel began to open its doors to the business and tourist traveler alike. Bit by bit the hotel was stripped bare of its opulent trappings. Its priceless art treasures were systematically sold off. The Romantic Age of ladies with big hats and bustles sipping tea in the Queen Alexandra room and was now officially dead. The Jazz Age had arrived.

By the 1920’s almost anything that was remotely considered old fashioned at the King Eddy was replaced with a more modern appearance. The most drastic and obvious change was the construction of an 18-storey addition even larger than the original hotel.

In 1920, the architectural firm of Esenwein & Johnson of Buffalo, NY, were hired to build the new addition to be topped off with the Crystal Ballroom, a magnificent space that was to become the new “in” spot in Toronto.

The Crystal Ballroom was in its day the most sought after ballroom in Toronto to hold weddings, banquets, state dinners, bar Mitzvahs, graduations dances and just any ol’ excuse to have a party.

It was unparalleled in scope, size, grandeur and perched high above the city—on what was then one of the tallest buildings in the city—and  became the place to see and be seen during the roaring 1920’s.

The ballroom heard the sounds of the greatest orchestras of the 1920’s, 30’s and 40’s including Count Bassie, Duke Ellington, Harry James, Tommy Dorsey, Benny Goodman and the King Eddy’s own in house big band orchestra Romanelli and his Syncopated Swingers.

The Prince of Wales (later the un-crowned King Edward VIII, the Duke of Windsor) and British Prime Minister Stanley Baldwin were entertained with a lavish state dinner August 8, 1927, in the Crystal Ballroom at the King Edward Hotel during a visit to Toronto.

Another important event that happened in the Crystal Ballroom was the announcement of Jonas Salk’s great discovery.

The Salk polio vaccine had proven safe and 80 to 90 per cent effective in tests on children across the United States and Canada. On April 12, 1955, nearly 700 doctors, technicians and nurses crowded into the Crystal Ballroom at the King Edward Hotel to watch the News report this historic event on two dozen TV sets installed specifically for the occasion. With the news, mass immunizations for millions of Canadian and American schoolchildren and their parents immediately got under way.

But the ballrooms days were numbered and in 1979 it closed. Peoples’ tastes were changing and it was thought the cost of renovations and bringing the ballroom up to code was too cost prohibitive. The fact that it sat vacant and forgotten probably saved the ballroom from being destroyed as it lay empty for nearly 40 years.

Now, after years unused and gathering dust, a massive renovation is taking place with a grand opening planned for March 2017.

Check out The Bulletin for exclusive photos of the opening! 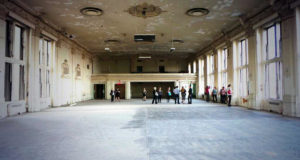 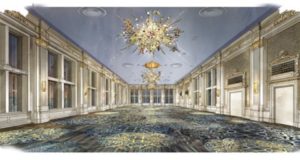 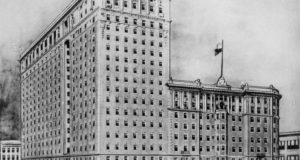 The King Edward Hotel topped by the Crystal Ballroom, circa 1923. 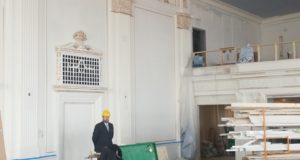 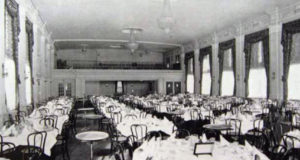 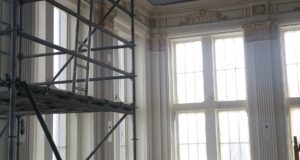 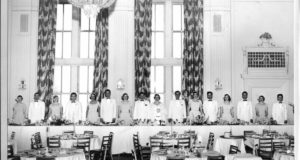 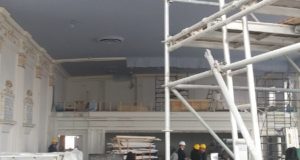 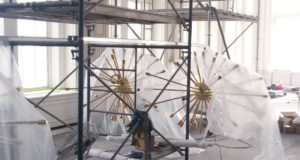 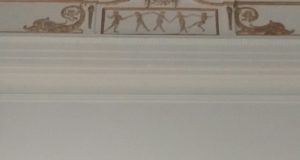 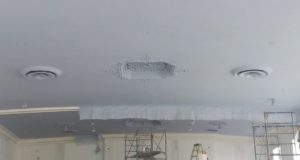