Bell in Brief: Basilica’s House of Providence gave shelter until Gardiner took it down

Posted by: Bulletin News June 27, 2017 Comments Off on Bell in Brief: Basilica’s House of Providence gave shelter until Gardiner took it down

The House of Providence once stood in the middle of a huge park, just south of the still-standing St. Paul’s Basilica (on Power St. east of Parliament) with which it was affiliated.

It had wings three storeys tall and was crowned by high, dormered roofs surrounding a four-storey centre block. It was through the doors of this majestic structure that many new immigrants to Toronto got their first true sense of Canadian benevolence.

With its castle-like appearance designed to give comfort to the homesick immigrant, the House of Providence would provide housing for some 700 elderly residents, orphans and other members of society’s most vulnerable groups.

The medical functions of the House of Providence were eventually taken over by St. Michael’s Hospital on Bond St. but its continued use as an orphanage and school lasted until its ultimate destruction in 1960.

This grand structure was demolished to make way for the Richmond St. ramp to the Don Valley Parkway and Gardiner Expressway. 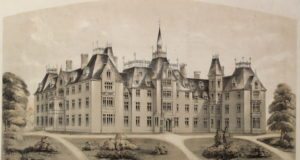 In 1858 the Roman Catholic Church would built one of the most important institutions in our history the House of Providence to care for the needs of the poor and infirmed.

The House of Providence building was demolished in 1960 to make way for the Richmond Street ramp to the Don Valley Parkway and Gardiner Expressway.

Previous: Bruce Bell: House of Industry was ‘apalling’ alternative to the streets
Next: What are you doing to grandma?