Posted by: Bulletin News May 25, 2017 Comments Off on Final CityPlace towers under way 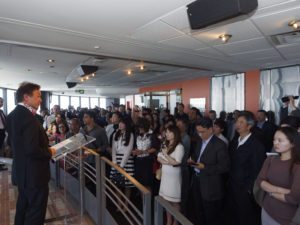 On May 17, at a gala luncheon atop the CN Tower attended by a glitzy crowd of about 160 top-end Toronto real estate agents, developer Concord Adex unveiled Concord Canada House, the final piece of the CityPlace development on the old Railway Lands.

The new condo project, to be built on the existing Concord CityPlace presentation centre site at 23 Spadina (at Bremner Blvd.), will complete the 50-acre CityPlace neighbourhood. As the final addition to the urban community, the new building will combine retail shops and office space with two residential towers.

Concord Adex chief financial officer Dennis Au-Yeung noted that the announcement of the 2-tower complex on a 10-storey podium containing office and retail space culminates the history of 20 years’ development on the site.

“This year marks Concord CityPlace’s 20th anniversary and we’re proud to have played a part in the spectacular change that has taken place in this neighborhood in the last two decades.”

The developers noted that the project, to be called Concord Canada House, will be themed in accordance with its name and will include a massive skating rink on the deck of the podium whose curvature is inspired by the Rideau Canal in Ottawa. The rink will double as an outdoor pond in the summer.

The building will be comprised of 1,400 residential units in one 68-storey tower and another 79-storey tower. 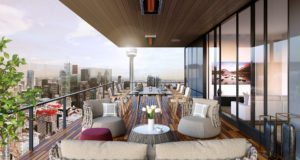 An artist’s depiction of the heated balconies that will be part of each suite in the new two-tower Concord Canada House block. 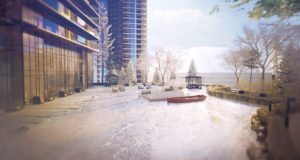 An artist’s depiction of what the tenth storey skating rink and pond will look like. 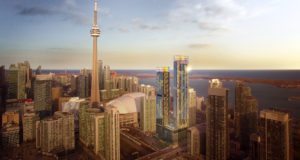 The artist’s idea of what the eastward views will look like from the top of the new buildings.

Gabriel Leung, vice president of Concord Adex, noted that the development—somewhat unusually for recent condo construction for Downtown—will be family-oriented with a higher proportion (over 10%, according to the developer) of 2- and 3-bedroom suites.

(Coincidentally, in a column over the Victoria Day weekend, Globe and Mail social issues commentator Doug Saunders noted the need for greater density in urban areas and pointed out that “condo” still has a somewhat déclassé implication. Research by TheBulletin.ca indicates that the square footage of the larger suites begins to approximate the size of suites in the 1960’s St. James Town project, which were considered large for their time and still remain among the largest in central Toronto.)

Vicky Hu with the ice sculpture of the 2-tower development.

Leung noted that all residential balconies will feature radiant ceiling heaters, lighting and composite wood decking to make the space usable during Toronto’s cooler months, thereby expanding available living space over much of the year.

With an eye to current concerns over foreign speculation in real estate, representatives of the developer also stressed that the target market for sales is Asian Canadian.

The Bulletin spoke with Lola Cheng, a Markham-based agent, who noted that the 15% tax announced last month by Ontario foreign purchase of residential property in the Greater Golden Horseshoe is already showing a definite impact on sales volume.

“Prices on detached housing in Toronto are still crazy but the condo market is still affordable for younger people,” Cheng added.