Posted by: Bulletin News June 16, 2017 Comments Off on Alterra favours bikes over cars in revised proposal for 520 Richmond 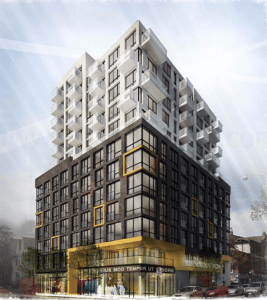 The design for the building proposed for 520 Richmond St. W. was influenced by its location in the Garment District. Photo: 520richmond.ca.

The first update was for Alterra’s proposal to redevelop 520 Richmond St. W. The application (which was first presented five years ago) deals with the site at the corner of Augusta Ave. and Richmond St. W. in the Garment District. The infamous Graffiti Alley also borders it.

Alterra has made a number of changes since the application was first put forward. Before the presentation began, a staff member from councillor Joe Cressy’s office stated the company has been one of the best that the city has worked with. This willingness to work with the city and community was evident in the developer’s presentation. Alterra had listened to the issues people had with the proposal five years ago and responded accordingly by adding elements that make the finished building a better fit neighbourhood—like integrating space for graffiti into the new building plan.

The property is located inside of a “regeneration” area. This means the city wants to utilize the real estate there in the most efficient way, welcoming mixed use proposals that will attract both businesses and residents.
The current building that stands at the site is a single-storey commercial warehouse building. The proposed replacement would be a 15-storey mixed use building (two storeys higher than the original proposal). It will also be relocated farther from Graffiti Alley in an effort to preserve that site.
The current plan proposes 108 residential units: 46% will be 1 bedroom,  28% will be one bedroom and den, 17% will be two bedroom and 10% will be three bedroom units. The total residential floor space will be 8,861 square meters.
Another 275 square meters of the building will be dedicated to retail space. The building will have below-ground parking with only 36 parking spaces, well below the required amount of 81 spaces. This lack will be offset by 141 bike parking spaces.
The developers also plan on making “graffiti walls” on the west and north side of the building: these walls will invite graffiti artists—who are already making a stop in the area for Graffiti Alley anyhow—to put their art on 520 Richmond as well.
The height of the building will be 46.2 meters (53 meters including the mechanical penthouse). To meet the city’s standards for green space, the developers will be constructing the mandatory green roof.
Aesthetically, the architect chose to draw inspiration from the nearby Garment District and incorporate it into the design. The building will have a woven-look façade. There will also be no glass balconies: instead, balconies will be constructed of pickets put very closely together. This decision got an overwhelmingly positive reaction from community members in attendance.
Those same community members aired their concerns about shadowing, asking how much sunlight neighbours would be losing once the building goes up. They also questioned the engineering impact that the construction work itself would have on neighbouring older buildings.

The proposal is still in the planning stages and has yet to be presented to city council: now is the time for feedback from concerned community members. Alterra is hoping to hear back from area residents so that the developer can mitigate any negative effects the construction and massing of the building will have on its future neighbours. 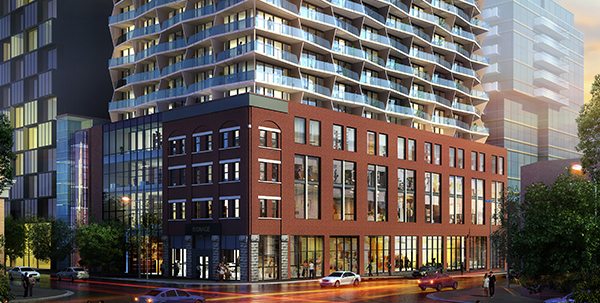 Residents living on Stewart St. will be in darkness for most of the day as the building proposed for 663 King St. W. would almost totally steal their sunlight. Image: mainandmain.ca

The second meeting of the night was dedicated to the building proposal for a 19-storey mixed use building to be erected at 663 King St. W. (at the corner of Bathurst and King streets).

The building will be a mix of residential, commercial, and retail space. There will be 247 residential units (including one-, two- and three-bedroom units). The residential floor space will take up 17,293 square meters with the remaining 4,950 square feet dedicated to retail and commercial uses.

The tower will be located next to the Thompson residences and across from the Thompson hotel, both very tall buildings in their own right.  The height of the building will be 62 metres (plus the mechanical penthouse which will take it up to 67 metres).

In order to make room for this new edifice, the existing buildings at 60 Stewart St. and 647 King St. will have to be demolished.

Architect Michael Leckman represented the developer Main and Main at the meeting. He brought up the concerns that community members had stated in previous meetings and explained how the developer is addressing them.

One of the biggest concerns was maintaining the character of King West. The developer will address this concern by rebuilding a masonry wall on the northwest corner on Bathurst St. and also on Stewart St.

Another concern was that the project (as originally proposed) did not provide enough units for families looking to move into the area: hence the increased number of two- and three-bedroom units.

The developers also looked at how Toronto is becoming more and more of a biking and pedestrian city. Main and Main wanted the building to reflect that. There will be only one underground level for parking: 98 spaces for cars and 276 spaces for bikes.

The meeting got a bit heated as a group of people living adjacent to the site on Stewart St. and in the Victorian Row homes in the area raised their hands. Residents living on Stewart—particularly at 55 Stewart St.—have legitimate concerns that they will live in darkness for most of the day as the new tower will steal almost all of their sunlight.

Residents of the Victorian row homes voiced a worry that they feel they are being enveloped on all sides by massive buildings. They also noted that they had a very negative experience during the construction of the Thompson residences: the work caused structural damage to their homes strewed construction debris land in their back yards.

Noise pollution, increased traffic and the ripple effect the other nearby properties would feel when construction begins on this massive building were also brought forward as community issues.

Alhtough there were no firm resolutions to any of their concerns, residents were advised that there will be more meetings on the project which, as it’s still in its very early stages, will not break ground for some time.

Become a patron of local news by sponsoring articles like this one. Patronage—at any level—allows us to hire writers and cover as many Downtown Toronto stories as possible. Patrons may opt to take credit for an article to let others know that they support community media. Email us at info@thebulletin.ca or call (416) 929-0011 for more information. Thank you!
520 Richmond Alterra city planning development Garment District Graffiti Alley Joe Cressy 2017-06-16
Bulletin News