On a rainy Tuesday evening loads of concerned Torontonians gathered in the auditorium of George Brown College’s waterfront campus to obtain information on the development of the city’s east side water’s edge and to talk with Waterfront Toronto’s board of directors in an open forum.

Even though the town hall meeting discussed a large section of a major North American city one could feel the sense of community shared by everyone in the room including Will Fleissig, the current CEO of Waterfront Toronto, who is rather new to the city having been appointed only 16 months ago. Fleissig has been involved in many large city development projects including most recently San Fransisco.

After a very brief technical delay Flessig began the meeting at 7:05 p.m. and was quickly able to instill a sense of personal ownership of the task at hand. After a quick apology for not having already spent what he felt was enough time in the community, he showed himself to be someone truly invested in the development of the world’s most diverse and multicultural city.

The initial focus of the presentation was the planned development of an area called the Quayside, which is opposite Merchant’s Warf along Queens Quay E. and extends from Bonnycastle St. to Small St. and includes both the little slice of land east of Small St. and the much larger 333 Lakeshore Blvd. E. currently used as a parking lot for the various booze cruises that cast off from Parliament slip.

According to Flessig this 5-hectare piece of land is set to become an example to the rest of Canada and the world and will promote environmentally friendly green space with a commitment to a 30% percent of greenhouse gasses by 2022 as well as affordable housing, business development and an active, artistic community.

The Quayside development would also boast the country’s first ever neighbourhood public art plan which will look at community space in a different way and will not only display individual pieces of art but will instead unify the entire neighbourhood with its own particular creative vision. 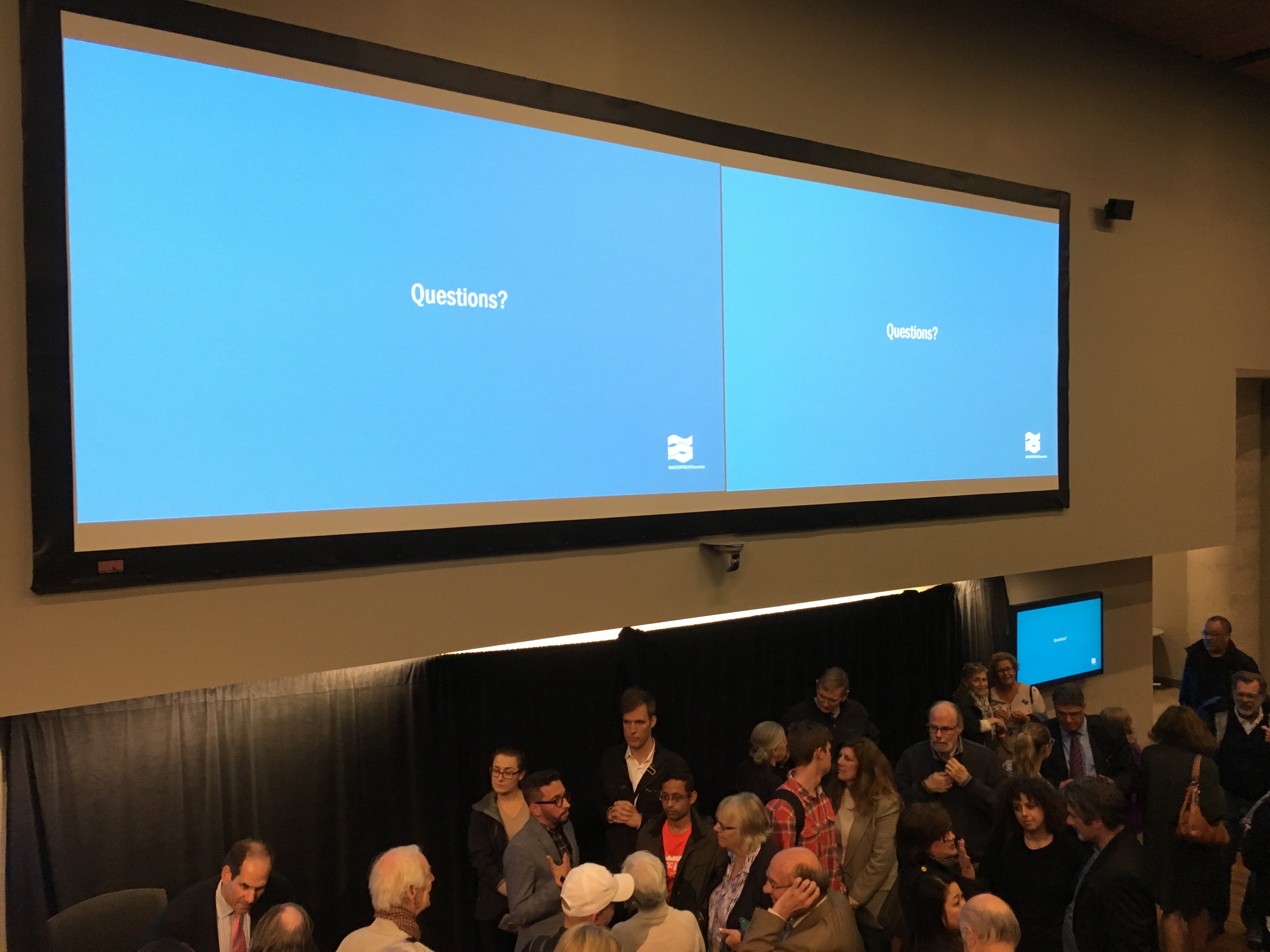 The scene at the June 6 Waterfront Toronto town hall meeting.

The Quayside is also simply the testing ground from which will extend the development of the 35 hectares encompassing Villiers Island with 13.1 km of newly created land at the water’s edge and finally the 356 hectares of the Port lands completing the proposed development plan of Waterfront Toronto, a project estimated to cost 1.25 billion with a 90% probability of coming in within budget.

Fleissig expressed a desire for more private investment beyond the current amount of an estimated $10 billion as well as the 44 development projects currently being carried out on private land. He proposed an estimated $1.6 billion in tax revenues to the three levels of government.

He was very confident of the profitability of the project, which centered on what Flessig termed the “five plusses.” These areas of improvement are: profitability plus, sustainability plus, neighborhood plus, destinations plus and engagement plus, of which the town hall meeting was an example. Each “plus” represents an aspect which the CEO and the board of directors are committed to improving and with Fleissig’s presentation and the input of various board members one feels that this is a goal that will be achieved.

The last 45 minutes were allotted to questions from the audience when the true depth of the city of Toronto’s sense community was shown. A great many questions were patiently answered by Fleissig, select board members and Christopher McKinnon who lead the town hall meeting. Previously unintroduced topics such as: increased infrastructure dedicated to water front activities and boating, an extension of the PATH system, off-leash dog areas and the air-quality and noise pollution issue brought about by the Toronto Island airport, which received a boisterous round of applause by a large percentage of the audience.

One topic, which was brought up repeatedly was the issue of affordability and local residents commented on rising rent costs as well as the scarcity of inexpensive grocery stores. A few members of the audience seemed concerned with gentrification and the growing inability to afford to remain living on Toronto’s waterfront but. Flessig responded well and told of an increasing level of affordability, which included 500 affordable housing units that abide by the CMHC guidelines on what constitutes affordable by current standards.

After the last question at 8:46 p.m. Flessig and McKinnon invited people to stay behind to have their questions answered and concerns allayed and even with the apparent division between some, there was definitely a strong sense of community and a unified commitment to improve the city’s water front and make Toronto a 21st-century city to be enjoyed by generations to come.

Previous: Art arrives at the ‘grim’ Toronto Bus Terminal
Next: A lesson from Jesus on learning