Posted by: Bulletin News June 7, 2017 Comments Off on Art arrives at the ‘grim’ Toronto Bus Terminal 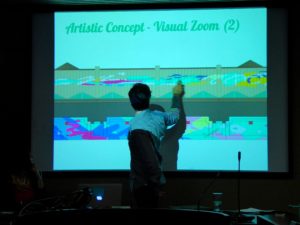 Lead Artist Sean Martindale zooms in on the concept.

The thing about a reveal (in art) is that it is a discovery of what is to come just as much as it is the backstory of a creation: and that was what the Steps Initiative info meeting on June 6 at city hall was all about.

The Toronto-based award-winning organization uses art—what they call “artivism”—to connect people to public spaces. That night, the meeting’s purpose was to reveal the concept and present an update about and timeline for the Tapestry of Movement mural planned for the Elizabeth St. annex of the Toronto Coach Terminal at 610 Bay.

For this organization whose mandate is to create a more vibrant city through bold public art statements, this mural location is ideal. The Terminal building itself—Art Deco, built in 1931, and processing over a million passengers a year through its various inter-city connections—has never given rise to a communal love of arrival and departure that, say, Union Station does.

And the site of the mural—the Elizabeth St. annex, built in 1984 specifically for Ontario’s GO buses—is particularly grim. A low, dark building, where arrivals may disembark and where parked buses skulk, its concrete façade dirty and prone to tagging, it presents itself as a place badly in need of some color and zing. And this mural may do it.

Thanks to community partners the YWCA, TTC, Coach Canada and Greyhound, the mural project will start in July and is scheduled to be finished by end of August. The design will make use of the awkwardness of the “canvas” of the building, which is not so much a wall as two separate layers: one high, one at street level, the two separated by cumbersome glass awnings.

It is this awkwardness of the built form that has influenced Martindale’s concept. Conceived in terms of layers, the upper part
will be of light bright hues and through colourful gestures reflect the idea of land, topography, and in particular the sense of movement through it, while the lower level will be bolder in tone and contain its own narrative.

Residents from the nearby YWCA Julia M. Ruby Leadership Centre will be assisting with the lower level. Their contribution will be to add the “more” – the over layering of hue-on-hue that will bring a sense of quilting to the work. In other words, while a quick walk past may reveal a bold dash of colour, look closely and you will see the detail. In addition to Martindale the mural’s crew will include two emerging artists, a project manager, as well as participating members from the Steps’ own “artivist” crew.

An avid supporter of the project, Wong-Tam congratulated Steps on the initiative, noting that finding a wall—and willing partners—is never easy.

Keen to bring the young artivists present into the conversation, Wong-Tam asked what they found exciting about the project. One member replied that the Coach Terminal “…is not a pleasant space. Anything that enlivens it positive.” Nobody disagreed.

The councillor also brought up the issue that the taxi stand might partially hide the full impact of the mural from view. While that question raised a short and lively discussion it was felt that (taxis or no) the vibrancy of the mural would still make its impact on the street.

Heading somewhere by bus in July or August? Why not plan a quick detour and catch the mural’s—and the wall’s—colourful evolution.

The Steps Initiative Coach Terminal project is supported by the Hal Jackman Foundation, City of Toronto, Canada 150 and Ontario 150. 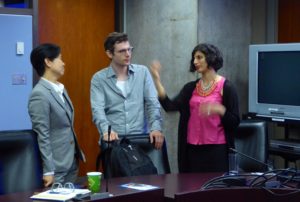 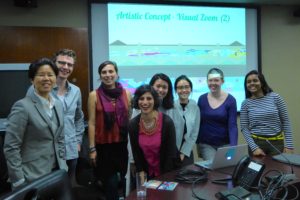 Lead Artist Sean Martindale zooms in on the concept. 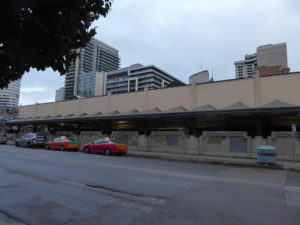 The grim facade of the Toronto Coach Terminal’s Elizabeth Street Annex – site of the mural. 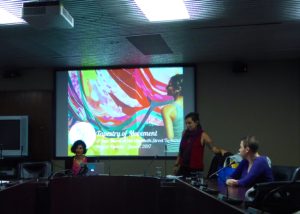 The name of the mural and its colourful intent introduced through the meeting’s first slide.

Previous: Everybody’s Got A Story: A Celebration of Canadian Women In Music
Next: Town-hall talk about more waterfront development 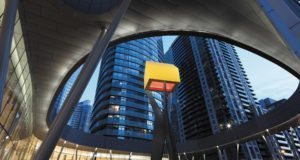