Everybody’s Got A Story: A Celebration of Canadian Women In Music

Posted by: Bulletin News June 6, 2017 Comments Off on Everybody’s Got A Story: A Celebration of Canadian Women In Music 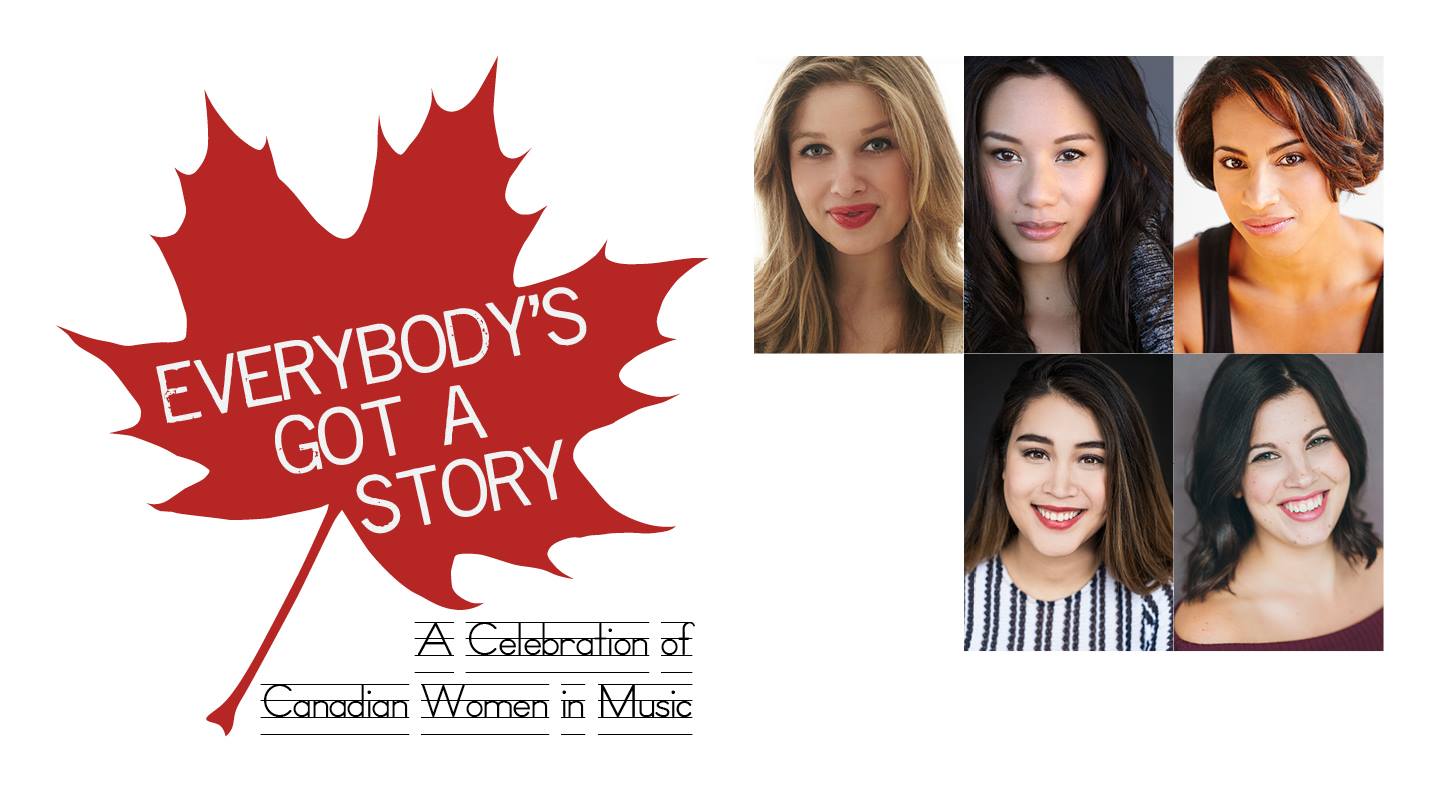 Musical theatre company Angelwalk Theatre celebrates Canada’s 150th with the world premiere of Everybody’s Got A Story: A Celebration of Canadian Women in Music. A tribute to the nation’s strong history of women in music, this must-see concert runs Thursday June 15 to Saturday June 17 at 8 p.m. nightly in the brand-new Lyric Theatre at the Toronto Centre for the Arts.

A popular theatre and cabaret performer, Kelly Holiff’s recent theatre credits include Taking The A Train (Soulpepper), Uncovered (Acting Upstage), Anne Of Green Gables (Charlottetown), and The Sound of Music (Theatre Aquarius). Kelly has performed in two holiday tours with Colm Wilkinson, as his special guest, and recently was featured in Any Dream Will Do with Angelwalk Theatre.

A Jessie Award-winning and Dora-nominated actor and singer, Elena Juatco is currently starring as Olga in Onegin (The Musical Stage Company) of which the Toronto Star said: “Juatco’s exceptionally creamy voice is another of the show’s musical highlights.” She recently appeared as Nicola in Kinky Boots (Mirvish Productions) and understudied the role of Éponine in Cameron Mackintosh’s 25th anniversary production of Les Misérables (Mirvish Productions). She also starred as Marcy in Angelwalk Theatre’s I Love You Because. Music from Elena’s debut album of original songs Beyond This Line will be performed in Everybody’s Got A Story.

Michelle Bouey starred as Dorothy in The Wizard of Oz (Grand Theatre), Jasmine in Aladdin (Drayton), and Mimi Marquez in RENT (Panasonic Theatre, Sheridan College’s Music Theatre Program). She is a graduate of the Music Theatre Performance Program at Sheridan College and has appeared on The Moblees (CBC), Odd Squad (PBS/TVO), and Top Ten on Over The Rainbow (CBC).

Katie Edwards works as a director, choreographer, and arts educator. Her performing credits include Anne Shirley in Anne (Theatre Orangeville), Luisa in The Fantasticks (Red Barn Theatre) and understudying as Dorothy in The Wizard of Oz (Ross Petty Productions). A graduate of Sheridan College (Music Theatre – Performance) and York University (Honours BA in Sociology and Gender & Women’s Studies), she has conceived many musical concerts.

Jeannie Wyse’s musical credits include Jersey Boys (Dancap), The Sound of Music (Mirvish), Seussical (Young People’s Theatre), Into The Woods, Riverdance (National Tour), Anything Goes, Chicago, The Wizard of Oz, Disney’s Mary Poppins (Drayton Entertainment), Hair (The Grand Theatre) and CBC TV’s Over The Rainbow. Jeannie is the Vocal Division Head at the Randolph Academy for the Performing Arts and is Associate Music Director at Metropolitan Community Church Toronto. She has toured and recorded with the Elmer Iseler Singers.

Angelwalk Theatre is a not-for-profit professional theatre company dedicated to producing musical theatre and providing opportunities for both emerging and established Canadian theatre professionals. Founded and serving as a resident company at the Toronto Centre for the Arts since 2009, Angelwalk Theatre has produced 16 musicals and has been nominated for 11 Dora Mavor Moore Awards. Select credits include the world premiere of Off-Broadway On Stage, the Canadian premieres of Stars of David, Ordinary Days, I Love You Because, and the Toronto premieres of Altar Boyz.