Posted by: Bulletin News May 25, 2017 Comments Off on Cathedral Court Co-op to endure Metrolinx expansion 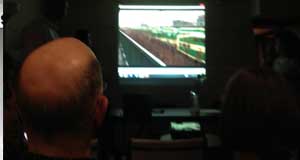 At issue is the co-op’s position lying just a few metres north of the Metrolinx rail lands which are a source of grief to co-op members.

Metrolinx, they say, ignores their concerns and rights to peaceful enjoyment of their homes. Rail cars and locomotives are moved around and serviced on that piece of property behind them at window height and there is now intention to add more lines closer to the co-op in order to appeal to voters in Guelph, Kitchener, London and Windsor.

The intention is to launch ultra-high-speed trains on that corridor, including an electric train line. They would stack up closer to and just behind Cathedral Court’s members’ homes which co-op members say is already making life miserable with noisy railroad operations a few metres to the south disturbing their peace.

It can only get worse, say co-op members, if more lines and trains are placed even closer to their windows.

Metrolinx isn’t great at planning rail projects. Take the benighted Union-Pearson Express. It was stupidly proposed to go from Union Station to the airport as an elitist service with uniformed butlers and maids and a hefty ticket price. A 10-year-old could have seen that wouldn’t fly.

While it’s understandable that folks in Kitchener-Waterloo, Guelph and such places would happily take a super-quick rail ride to Toronto, even for a hefty price, how many folks in Toronto would line up to visit in a hurry, say, Guelph? It would be near-empty trains from TO back to those western Ontario burbs.

So the whole thing seems as dumb as the white-glove U-P Xpress.

Yet another costly blunder by our incapable provincial rulers seems imminent.

Previous: Bell in Brief: Superman would not recognize today’s Metropolis
Next: Final CityPlace towers under way