Bell in Brief: Superman would not recognize today’s Metropolis

Posted by: Bulletin News May 25, 2017 Comments Off on Bell in Brief: Superman would not recognize today’s Metropolis

The former Toronto Star Building was the headquarters of the Toronto Star newspaper from 1929 until 1970. It was then demolished to make way for the First Canadian Place tower.

Joe Shuster, the co-creator of the comic book Superman, once worked as a newsboy for the Toronto Star which at that time stood on the north side of King Street just west of Bay St. 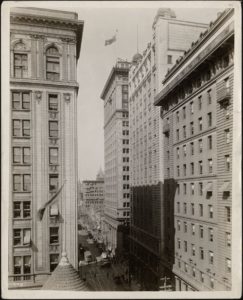 When they were first built at the turn of the 20th century those early skyscrapers at King and Yonge transformed our city from being very European in design ruled over by church steeples to becoming a very North American city on par with Chicago and New York.

In an interview he gave to the Toronto Star before his death in 1992 Joe said, “Cleveland was not nearly as metropolitan as Toronto was, and it was not as big or as beautiful. Whatever buildings I saw in Toronto remained in my mind and came out in the form of Metropolis.”

While fragments of Toronto’s skyline that inspired a young Joe Shuster are still around (like the striking bank buildings at King and Yonge) others weren’t so lucky.

Toronto lost a dozen or so of its early skyscrapers during the urban renewal phase of the 1960’s and 70’s including the Foresters Building at Bay and Queen, the Bank of Montreal at King and Bay, Ford’s Hotel on Dundas and Bay, and the former Toronto Star Building, considered to be one of the finest art deco skyscrapers ever built in North America.