Posted by: Bulletin Editor May 23, 2017 Comments Off on The anti-Assad gas caper

It was a clearly trumped-up (no relation, no pun) sarin scam to blame Syria’s Bashar Assad government for the alleged gas attack against Syrian civilians.

There is a group of terrorists (known as “White helmets”) who are subject to U.S. directions who were pictured in the videos of dead civilians and blaming Assad, whom they oppose.sarin scam

U.S. President Donald Trump took one look at the photos of White Helmets bare-handed holding poisoned Syrian children and swallowed what he was told: Assad murders his own people and used outlawed sarin gas which is made from castor beans. Those are the beams used to make the constipation-relief remedy castor oil).sarin scam

Canada and the rest of the “free” world jumped on board. But reason quickly went under.sarin scam

A lot of shit was pushed through on this “event,” but none came from castor oil or sarin gas.

The fact that White Helmets could touch the poisoned skin of Syrian kids means there was no sarin gas involved. It’s hyper-deadly. Just a touch of sarin on your skin and you’re dead!

The only constipation flowing around that misrepresented “event” was the lying palaver blaming the Assad regime.

The Donald took one look at alleged photos of those “beautiful babies” lying dead and ordered a missile-attack to nowhere against Assad. For all the fireworks against a Syrian airfield from Trump’s shitfit there was minimal damage. A shocking percentage of U.S. missiles never hit their targets.sarin scam

To her credit, Canada’s foreign minister Chrystia Freeland didn’t jump to the outright support of the sarin gas claim. Her breathless-talking boss, Justin Trudeau, also didn’t go in with both feet and 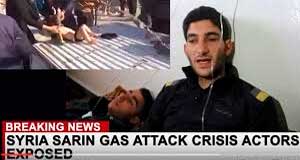 name it a sarin attack.

Freeland, a Ukrainian Canadian, is persona non grata in Russia and despite her official position in Ottawa is prohibited from entering Russia—a seeming huge liability for a Canadian foreign minister unless tempers and attitudes make some remarkable and perhaps unlikely adjustments.

The U.S. deep state is desperate to re-establish itself as the sole and principal world power and would manoeuvre to hold back Russia and China in that hegemonic ambition. But one hopes that going to war for hegemony is out of the question in the minds of America’s rulers.

Under Agenda 21, a U.S. neocon ambition, America has perpetrated its planned wars against seven Middle Eastern nations with Libya the most recent demolition success and Syria actively resisting once-imminent destruction with Russia’s help.
There is a Ukrainian hotspot that Freeland refuses to translate correctly. It involves Russia’s absolute right to possess and occupy Crimea, which has always been Russian and is vital to Russia’s national interests and its self defence.

Crimea is the only all-season seaport Russia has. Its fleets would be ice-bound in the winter and Russia would be diminished as a world power. That’s the ambition of the U.S. and its allies but consider how murderous U.S. foreign aggressions have kept the world in turmoil and poverty by America’s lust for blood and treasure on behalf of its 1 percent.

To balance out the scale of power is to prevent America’s hegemonic maniacs from dominating the world.

Let’s go back a short distance to 2014. That is when the duly elected (legitimate) Ukrainian government of Viktor Yanukovych was overthrown by a U.S.-backed “colour revolution” and a plutocrat, Petro Poroshenko, was planted in his place.

(Freeland, by the way, wrote the superb book Plutocrats which outlines and defines how the superrich are impoverishing the rest of us by planned steps. Consider the statement from Britain’s Prince Philip that he would like to reincarnate as a deadly virus to depopulate the earth. )

Do we really want a lopsided state of world military and economic power?

That’s what the U.S. deep-state cadres and other neocons have outlined for their future.

Russia and its allies might be the only counterbalance to an impoverished and dominated world if western-backed plutocrats rule.

Previous: NAFTA & Canada vital to the U.S. economy
Next: Bell in Brief: Superman would not recognize today’s Metropolis