Posted by: Bulletin News May 16, 2017 Comments Off on Toronto Island walking tours delayed due to flooding: update 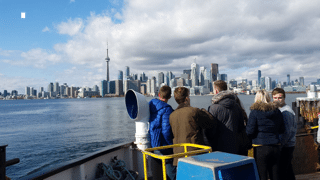 “We usually hear it in summer,” says Rosenbaum, “when visitors see what a beautiful place we live. It can be idyllic.”

“So we generally agree with them,” says Roy, “but invite them back to visit in mid-February,” she adds, “to make sure they get the full picture.”

According to Rosenbaum and Roy, most people don’t have any idea what it’s really like to live on the Island. That’s one of the reasons they are launching “Walk Ward’s Island: An Insider’s Tour of the Toronto Island Community.”

Visitors will see homes, gardens and public spaces; learn about the community’s 150 year-old history; hear personal stories about what it’s like to live on the Island and the issues facing the community.

Rosenbaum and Roy are the first to offer this service to the public.

They had planned to give tours on Ward’s and adjacent Algonquin Island twice a day, three days a week, beginning June 1 however the recent flooding and city-imposed closure of the Toronto Island park to non-residents will push back the tour start date.

“As of now, it’s possible that we won’t be able to give tours until the end of [May],” reports Roy. “We’re hopeful that water levels will drop and that normal Island life will resume, so that we can give tours before June 30. At this writing, we’ve been told that Park access will be limited until that date. Please check our Facebook page which we update regularly.”

They will continue through the summer and into September, weather permitting.

Over one and a half million people visit the Island every year after a 12-minute ferry boat ride leaving from the Jack Layton Ferry Terminal, located at the foot of Queen’s Quay and Bay St. in downtown Toronto.

According to the tour guides, many people are unaware that over 600 people live year-round in cottage-like homes on the eastern end of the Toronto Island Park (interchangeably called The Islands, or the Island – though it’s actually a cluster of 15 interconnected islands).

“We have a very close-knit community,” says Roy, “and feel privileged to live here.”

At the same time, day-to-day living is not always convenient.

There are no cars or stores on the Island, and Islanders lead their lives according to boat schedules. “It’s a bit of a challenge sometimes,” says Roy, especially when needing to bring over a new fridge or load of firewood. “By necessity, bikes and carts play a big role in our lives.”

Visitors are intrigued when they discover the residential community, say Rosenbaum and Roy, who have each lived on the Island over 30 years, and raised families there.

They are frequently asked questions about what it’s like living on the Island:

All questions will be answered.

Islanders have seen a significant increase in visitors in the last five years, especially since Trip Advisor and the New York Times have highlighted the Island as a must-do activity when visiting Toronto.

They also note the increase of condominiums downtown and along the waterfront; lack of adequate green space for the downtown core’s growing population; and folks staying closer to home for getaways – as reasons for the ever-increasing popularity of the Toronto Island Park.
And, as Rosenbaum notes, “There’s a greater awareness about the beauty and pleasures of the Island.”

Tours will be offered June through September.

Meet at the white gazebo at the Ward’s Island Ferry Dock at the eastern end of the Toronto Island Park.

Previous: Bell in Brief: The Derby Tavern was for Corktown dreamers
Next: York St. to close between Queens Quay and Harbour for weekend demolition