In 2016 partial funding was secured from the City of Toronto to implement the Gibraltar Point Erosion Control Project. As erosion control measures were not implemented within five years of the 2008 approval of the Conservation Ontario Class Environmental Assessment for Remedial Flood and Erosion Control Projects (Class EA), an addendum under Section 6.0 of the process is required.

The objective of this addendum is to reconfirm our understanding of the existing conditions of the shoreline and to ensure that the underlying conditions and results of the Class EA remain valid. The amendment will be completed prior to the start of construction.

The objective of the Gibraltar Point Erosion Control project is to provide long-term protection and viability of the functions and uses of the Toronto Islands, such as: recreation; critical infrastructure (parks, water, roads); and aquatic as well as terrestrial habitats.

Planning Mechanism for the Undertaking

In 2004, TRCA initiated the Gibraltar Point Erosion Control Project under the Class EA process (2002). The project was granted approval on March 17, 2008. To view the report click on the link below:

As erosion control measures were not implemented within five years of the approval, an addendum under Section 6.0 of the process is required.

The objective of this addendum is to reconfirm our understanding of the existing conditions of the shoreline and to ensure that the underlying conditions and results of the 2008 Class EA remain valid. The amendment will be completed prior to the start of construction.

The Class EA addendum process provides an opportunity for all views respecting a proposed remedial flood or erosion control project be taken into consideration. As in 2008, there will be a Community Liaison Committee (CLC) that will allow citizens, local interest groups, and non-governmental organizations to voice their opinions and assist in the planning and design process of the project.

In addition to the CLC, those wishing to participate in the addendum process are invited to attend a public meeting (date to be determined) and/or contact the project team directly.

Gibraltar Point is located at the southwesterly tip of the Toronto Islands, on Lake Ontario. Erosion has been documented at Gibraltar Point since 1879. In 1972, significant storm damage prompted the first of several studies recommending various long-term remedial solutions. Despite these recommendations, no major remedial actions were financially supported. Attempts were made to protect the Gibraltar Point shoreline with gabion baskets and rubble. These attempts had short-term success as they failed to address the large-scale coastal processes affecting the site.

A severe storm event in February 2004 caused significant damage to an existing washroom building and associated infrastructure, prompting the City of Toronto to request the assistance of the Toronto and Region Conservation Authority (TRCA). TRCA responded by immediately securing the shoreline adjacent to the washroom with emergency shoreline protection.

TRCA with support from the City of Toronto, completed an Environmental Study Report (ESR), in accordance with Conservation Ontario’s Class EA process to develop a long‐term solution to address the shoreline erosion around Gibraltar Point (TRCA, 2008). As part of the Class EA process, TRCA retained Shoreplan Engineering to complete a coastal analysis to determine the regional processes around Gibraltar Point and assist with the development of alternative long-term solutions to the shoreline erosion.

The results of Shoreplan’s investigations determined that although erosion and deposition are occurring at various locations between the Western Gap and Gibraltar Point, there is an overall net loss of sand resulting in ongoing shoreline erosion. A comparison of hydrographic survey data shows a lowering of the lakebed in the nearshore area around Gibraltar Point, which is consistent with the undermining and eventual failure of previous local shoreline protection works. Furthermore, Shoreplan’s findings indicated that over the next 100 years, a substantial loss of highly valuable recreational and ecological land is projected, ultimately resulting in the breaching of the Islands from Lake Ontario to the Inner Lagoons within the next 20-25 years.

In 2009 TRCA and the City of Toronto retained W. F. Baird and Associates (Baird) to undertake a Phase II Coastal Engineering Study (Phase II Study) which included coastal engineering analysis and final design for the Class EA outcomes. As part of their Phase II Study, Baird was directed to complete two supporting assessments: 1) evaluate potential offshore sand sources for an active sand management approach at Gibraltar Point; and 2) and assess the projects potential impacts on the formation of transitional hind dune system present at Hanlan’s Beach.

As a result of the supporting studies, Baird’s Phase II Study will complete a detailed assessment of offshore structures that could be combined with a sand management approach; that, would involve the placement of locally acquired sand onto the shoreline in the area of Gibraltar Point, over a period basis, to restore land lost to erosion. Possible offshore structures for a preferred alternative identified in the 2008 Class EA include submerged sills, low-crested structures, emergent breakwaters, and groynes. Two additional alternatives will be assessed including a stand-alone sand management approach and an offshore breakwater, groyne, with focused sand management. Subject to the findings of the addendum process and prior to construction, Baird will finalize their Phase II Study.

Since 2008, the unprotected land around Gibraltar Point continues to be subject to significant erosion, putting places of culture, natural ecosystems (such as Environmentally Significant Area, an Area of Natural and Scientific Interest, and Provincially Significant Wetlands) and built infrastructure in jeopardy of complete loss. This project seeks not only to protect the loss of the island, and risks to infrastructure, but also to ensure that sand transport remains in place to maintain existing beaches and sand dunes.

In 2016 partial funding was secured from the City of Toronto to implement the Gibraltar Point Erosion Control Project. In accordance with the Class EA 5-year review process the 2008 EA requires an amendment. The objective of this amendment is to reconfirm our understanding of the existing conditions of the shoreline and to ensure that the underlying conditions and results of the Ministry of the Environment and Climate Change approved Class EA remain valid. The amendment will be completed prior to the start of construction. 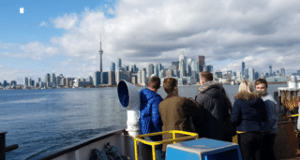