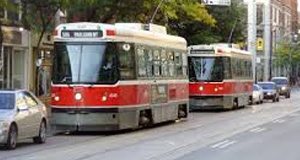 Reused with permission from the Toronto Financial District BIA.

The King Street Pilot Study is a plan to prioritize streetcar service along the 504 King Streetcar route from Bathurst Street to Jarvis Street. At present, this route carries 65,000 people on weekdays. Currently streetcar service can be slow, unreliable and erratic, with unpredictable travel times and significant overcrowding.

The intention of the pilot is to increase the speed, reliability and capacity of the 504 King Streetcar.

HOW WILL THE KING STREET PILOT STUDY IMPACT THE FINANCIAL DISTRICT WHERE I WORK?

King Street will no longer serve as a continuous east-west arterial route through the city, and is intended to serve local traffic only.

There will be a vehicle “loop” within the Financial District, where vehicles will be able to travel continuously between University and Yonge. At those intersections, vehicles will be forced to make a right-turn.

WHEN WILL THE PILOT STUDY ACTUALLY CHANGE KING STREET?

The City of Toronto is planning to begin the Pilot Study in late Fall. The proposal is scheduled to go to Executive Committee on June 19, with final City Council approval on July 5-7. Current construction on Wellington Street is scheduled to be completed in advance of this pilot.
Comments or questions should be directed to your local Councillor.

WHEN I TAKE THE STREETCAR HOW MUCH FASTER WILL MY COMMUTE BE?

To date, no estimates with respect to improved speed and reliability, or increased capacity have been released by the City.

WILL I STILL BE ABLE TO DRIVE TO WORK?

Yes, but you will need to modify your route to access destinations along King Street within the Financial District.

WILL I STILL BE ABLE TO GET A TAXI OR UBER IN THE FINANCIAL DISTRICT?

WILL MY WALK IN THE FINANCIAL DISTRICT BE IMPACTED?

No. All sidewalks in the Financial District along King Street will remain as current.

WILL I BE ABLE TO BIKE INTO THE FINANCIAL DISTRICT ALONG KING STREET?

Yes, bikes will be allowed along King Street as part of the Pilot Study. However, no additional cycling infrastructure is planned as part of this pilot project.

HOW WILL DELIVERIES BE IMPACTED?

All existing curbside uses including deliveries and loading will be maintained along King Street in the Financial District.

The Toronto Financial District BIA will continue to be a key stakeholder active in the development and implementation of the King Street Pilot Study. Our BIA is committed ensuring a rigorous evaluation process to monitor commuter impact and ensure the Pilot Study improves the commutes of those who work in the Financial District.

Previous: Metrolinx will inspect your property ahead of Jarvis, Sherbourne construction
Next: Act II is having Dinner With Goebbels