Fear and despair: Greece’s national wealth is for sale

Posted by: Bulletin Editor August 26, 2015 Comments Off on Fear and despair: Greece’s national wealth is for sale

Eight months will have passed since the election of Syriza on January 25 up to the snap elections in September. During that time Syriza’s leaders play-acted their ‘opposition to austerity’ and then knelt down in submission to the ‘Troika’.

The contrast between January and now is dramatic: Syriza’s leader, Prime Minister Alexi Tsipras, aroused joy and great hope among the Greek voters with his promises to end Greece’s subjugation to the European oligarchs (the “Troika”) but now convokes snap elections exploiting the pervasive fear and misery among the population. Greeks confront a future of even greater impoverishment and despair with an entire generation bound up and delivered to 40 years of debt slavery and colonial subjugation by their elected Syriza leaders. 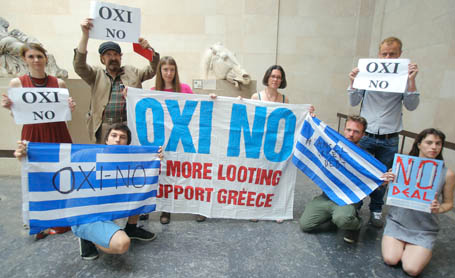 In January, c swept into office on its promise of ‘change’ without specifics. ‘Change’ turned out to be an empty slogan. Changes did take place: Changes for the worse! Since his election, Tsipras emptied the Greek Treasury to pay the EU bankers; stripped pension and municipal funds to meet IMF obligations and, worse yet, he allowed the flight of over 40 billion Euros to be transferred from Greek banks to overseas accounts – essentially de-capitalizing the financial system.

The linguistic perversion of “change” was not the worst of Syriza’s contribution to the corruption and discredit of the European left. Its slavish pillage of the economy shocked and confused the impoverished Greek majority. The voters had expected Syriza and its radical phrasemongers to do the opposite – to save the national economy and lead the country!

For a while Tsipras’s submission and betrayal was disguised by his theatrical poses of the ‘tough negotiator’ with the German bankers.  His perpetual boyish grin, frozen on his face, as if to reassure his followers: “You can trust me. I will make sure Madame Merkel and company do not shove another bristly cucumber up your backsides!” Tsipras feigned resistance before the bankers, setting a stylistic template for other Syriza legislators, who likewise ‘protested and submitted’. They too came to believe that ‘their efforts’ (and not their results) deserved public approval!

Between February and April, Tsipras endured stern lectures from his overlords in the EU, returning to Greece with his silly grin and empty pockets.

Tsipras did everything possible to distract, to entertain, to bluster and deceive Syriza’s befuddled supporters.

His emotional outburst were just ‘hollow farts’ (kfes pourdes in demotic Greek) in the poetic language of an insightful, indignant grandmother whose pension had been cut by 40%!

Syriza bent and broke before the predictable intransigence of their German overlords and their 28 rubber-stamping, vassal states. Syriza got nothing and worse. The more they talked, the less they achieved…

Tsipras broke the Greek financial system and then declared defeat, but not before mounting one more grand electoral fraud. Syriza announced a popular ‘referendum’ on the EU dictates and 61% of the Greek voters said “no” to the EU demands. But Tsipras immediately said yes!

Tsipras accepted the complete sell-off –‘privatization’– of all the strategic, lucrative, major and minor public enterprises, properties and sources of Greek national wealth.

There were no popular uprisings in the street on Tsipras’ capitulation: just a little ‘tempest in the teapot’in the Greek Parliament when the “Left Platform” voted no, showed their backsides to their now ex-leader, defected and formed a new party – Popular Unity. With no mass organization and not supporting mass action, the ‘Left Platform’ just rose up on their hind legs . . . to bray out a manifesto calling for ‘popular unity’….within the confines of the Parliamentary cesspool of knaves and scoundrels. Meanwhile, Syntagma (Constitution) Square was full of pigeons and homeless vagabonds… Is this another hollow fart?

These armchair rebels, who sat in the Cabinet and slavishly followed Tsipras for seven months, engaging in sterile internalparty debates and giving interviews to the dwindling bands of leftist academic tourists, while ignoring the street fighting youth, will face a new election in one month. They have the insurmountable task of convincing a cowed, confused and fearful electorate that they should unite, organize and reject Tsipras, Syriza and infinite regression.

Tsipras, for his part, will take the EU ‘bailout funds’, pay the banks and finance his own campaign. He will get free publicity from the domestic and foreign press (the Financial Times editorializes in praise of ‘his courage and good sense’) and employ an army of campaign workers with bail-out funds to obliterate the ‘Left Platform’. He will thus gain support from the Greek oligarchs and having adopted the platform of the right opposition, he has little to fear electorally from the boring old kleptocrats of Pasok and New Democracy, who cannot match his giveaways, theatrics and demagogy at the ballot box.

Disillusion and direct action—strikes, marches and fiery barricades – will set in after the September elections when Tsipras has further slashed pensions and shredded labor rights, when privatizations lead to massive layoffs at the docks, airports, power companies and oil refineries. Tsipras’ call for rapid elections was designed to secure votes from a shocked electorate before the pain of his massive sell-out is fully felt.

With time, there will be tempestuous protests, but the EU will have pillaged Greece of its present and future wealth. Tsipras’ electoral support will dwindle and tear gas will once again perfume the streets of Athens. Then, the old political whores and kleptocrats from the Right will trot out to center stage once more. And who knows, Tsipras may even form a new ‘inclusive’ coalition regime with the sluts of the right. Bankers, oligarchs and kleptocrats are not fussy about their bed-partners, even played-out traitors with boyish grins are worth a ‘romp in the sack’ if it gets them back in power…

The financial press and the mass media concocted an image of Syriza as “far left” or “hard left”. In fact, Syriza did everything possible to destroy the hopes of the majority of downwardly mobile Greeks desperate for a reversal of the shock austerity policies imposed by the EU.

From the very first day in office, Syriza leaders embraced theoligarchical structure of the EU, retaining the Euro currency and recognizing the illicit foreign debt.

Caged from the outset, Syriza just made a big racket, rattling the bars and pleading for a long leash and more time.

The trained eyes of the EU autocrats recognized Syriza leaders as captives, given to inconsequential political ejaculations and ‘outraged protestations’. They made no concessions: Indeed bankers decided to really punish the Greek voters for electing the clowns…

The Germans immediately sized Tsipras up as a marshmallow leftist – organically incapable of breaking out of the EU cage, of renouncing the Euro and the debt. With their long historical experience, Euro-imperialists know how to treat ‘socialist’ and ‘nationalist’ subjects, who negotiate on bended knee: “The more you kick them, the less they ask”

Tsipras begged for money to pay the European and US banks! He agreed to sell twenty-nine Greek airports to German capitalists in order to pay the German bankers.

In other words, Syriza and Tsipras have impoverished millions of Greeks and sold off all of Greece’s lucrative enterprises so that German, French and English holders of Greek bonds will not miss a single interest payment!

Was Tsipras just posing as a Prime Minister while serving as a pimp for gang rape?

According to the latest polls, the Greek people will re-elect him! The victims have gone mad!…God bless Greece –the cradle of democracy has become a roiling nest of vipers. 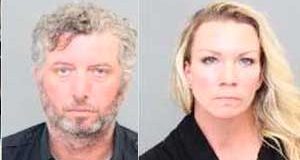