The Trudeau government introduced sweeping changes to Canada’s water, environmental and energy legislation. For people like you and me who care deeply about water, we’ve been waiting more than five years for this day—ever since the Harper government stripped 99% of lakes and rivers of federal protections in order to grease the wheels for the approval of energy projects.

There was reason to be hopeful. Leading up to the 2015 election, the Trudeau government committed to restore the gutted protections and incorporate modern safeguards.

The Council of Canadians has worked tirelessly to hold Trudeau to that promise. We ran dynamic public education and advocacy campaigns that drove tens of thousands of people from across the country to flood federal consultations. We joined Indigenous nations and fellow environmental groups to deliver clear demands to the federal Standing Committee on what we wanted to see in any new water legislation.

So I’m disappointed to tell you that after careful examination the proposed Canadian Navigable Waters Act (CNWA) falls well short of what the Trudeau government promised and the public is demanding.

In fact, it fails to even restore protections to the standards that were in place prior to Harper gutting them.

Not surprisingly, you can see the energy industry’s fingerprints all over it.

Waterways across the country would remain unprotected from major energy projects like pipelines, which would be exempt from having to pass environmental impact assessments.

But I’m writing to assure you that our work does not stop here. The Council of Canadians is redoubling our efforts—and you can help right now.

Please add your voice in calling on the Trudeau government to scrap its weak proposal and table the much stronger water protection legislation you and I know Canada needs.

A closer look reveals several problematic aspects of the new legislation, including that it:

• Fails to protect lakes, rivers and drinking water sources by exempting massive energy projects such as pipelines and transmission lines from the CNWA including controversial projects like Kinder Morgan’s Trans Mountain pipeline (which crosses 1,355 waterways alone) and the Alton Gas pipeline in Nova Scotia. The act could also approve illegal fracking dams in northeastern B.C. after construction has started.

• Fails to protect oceans, ecosystems and marine life, such as the endangered right whale, from offshore oil and gas drilling.

• Retains the federal government’s power to declare any project to be “in the national interest” and approve it, regardless of the findings of the impact assessment review.

• Fails to require obtaining free, prior and informed consent of Indigenous peoples prior to the approval of energy projects.

• Downloads responsibility onto the public to engage in a complicated process to register lakes and rivers in our communities that should be protected.

• Read more analysis of the proposed act in my blog.

You and I know how vital water is to all life.

You and I know the many ways lakes, rivers and drinking water sources are increasingly under threat from industry, pollution and climate change.

You and I know that Canada needs bold and visionary laws to protect water today and for future generations, and must work with Indigenous peoples on a nation-to-nation basis to create these laws.

What the Trudeau government is proposing simply isn’t good enough. And we cannot allow it to stand. The stakes are too high.

That’s why our work is far from over. The Council of Canadians is redoubling our efforts – and I need your help right now.

Please add your voice in calling on the Trudeau government to scrap this weak proposal and table the much stronger water protection legislation you and I know Canada needs. Click here.

You have been instrumental in building a community of people from coast-to-coast-to-coast that understands the importance and sacredness of water, and our duty to protect it.

I can’t thank you enough.

Now with your continuing support we will push harder than ever for Canada to enact bold and visionary legislation that protects our watersheds and drinking water sources, respects Indigenous treaty rights, implements the UN human rights to water and sanitation and recognizes the ecological integrity of water itself and the need to leave it as intact as possible in watersheds.

Thank you for being a water warrior – and for taking the action that’s needed today to ensure we protect our lakes, rivers and drinking water for future generations.

Let’s not stop until we get it right on water.

Thank you for all you do,

Previous: 5 incredible graduation-party ideas
Next: Pierre’s silly son screws up all he surveys 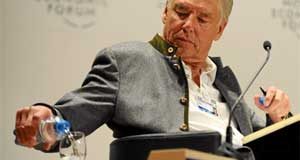