Dylan Penner – The Council of Canadians launched a national boycott campaign against Nestlé in Guelph last night. Guelph and the neighbouring region of Wellington County are currently ground zero for a battle between a local community protecting their water and the multi-billion dollar bottled water giant. “The water crisis is at our door here in Canada,” said Maude Barlow, National Chairperson of the Council of Canadians. “Groundwater resources are finite and are currently taxed by droughts, climate change and over-extraction. At this pace, we will not have enough for our future needs. Wasting our limited groundwater on frivolous and consumptive uses such as bottled water is a recipe for disaster. We must safeguard groundwater reserves for communities and future generations.” This summer, while many parts of southern Ontario faced drought conditions, Nestlé continued to pump more than four million litres of groundwater every day from an aquifer near Guelph. Nestlé pays less than $15 per day for this water, which it then ships out in hundreds of millions of single-use plastic bottles for sale all over North America. Nestle’s CEO is a James Bond-style villain 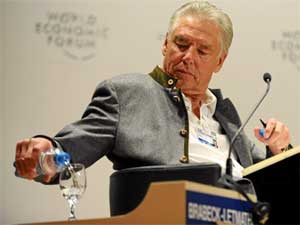 Peter Brabeck, Nestlé’s prez who says water “is not a human right.” Buy it from him, eh?

The Council of Canadians is calling on people to sign a declaration on its website to boycott bottled water and Nestlé. The declaration warns: “Between 2011 and 2015 the aquifer that supplies the main Nestlé production well dropped about 1.5 metres, while Nestlé’s water taking increased 33 per cent over the same period. Meanwhile, Nestlé just bought up another well in Middlebrook—despite the local municipality’s attempt to purchase it to safeguard their municipal water supply.” Nestlé’s operations in British Columbia have also stirred up opposition from communities trying to protect their water. Despite the District of Hope experiencing Level 4 drought conditions last summer, Nestlé continues to extract 265 million litres from a well in the district. Nestlé pays $2.25 for every million litres it draws from the Kawkawa aquifer, which approximately 6,000 nearby residents in Hope rely on. Canadians can pledge their commitment to the boycott at canadians.org/nestle The Boycott Nestlé campaign was announced at the launch of Maude Barlow’s new book in Guelph, part of a 14-city coast-to-coast tour. Copies of Boiling Point: Government Neglect, Corporate Abuse, and Canada’s Water Crisis (ECW Press, September 2016) are available for journalists upon request.