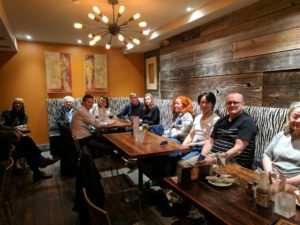 Cabbagetown South residents talking and having drinks before the meeting started.

Cabbagetown South residents are angry because of a new pilot project the city is launching that will require some residents to swap their small green bins for larger, bulky ones.

The project is planned to roll out in the Downtown wards in the fall according to Kelly Sather, Deputy Mayor Pam McConnell’s constituency assistant, speaking at a Cabbagetown South Residents Association (CSRA) meeting June 7, 2017.

The pilot project will take place this summer on Ontario St. from Dundas St. E. to Shuter St. and Alpha Ave. in Cabbagetown, Sather added.

The new green bins are the size of the city’s current garbage and recycling bins.

In response to the city’s pilot project, Cabbagetown South residents took a survey to determine the attitudes toward the new green bin program, said Jeff Lookkong, president of the CSRA.

The survey found that 29.73% of Cabbagetown South residents would not participate in the green bin program if the large bin is the only option. It found that 24.32% of residents don’t have room for the large green bin, while 37.84% said the bin is never filled to its capacity.

“There is still room for flexibility within the city,” Sather said. “I believe they want feedback from residents, and I believe they will work out alternative options because they have in the past.”

Cabbagetown South residents have also seen an influx of break-ins and vandalism in the neighbourhood, Lookkong said.

One Cabbagetown South resident, Nadeem Ahmed, had his home broken into recently, but police were able to catch the suspect through Ahmed’s security cameras, Lookkong added.

The redevelopment of the Beer Store was also a large point of contention during the meeting. A developer has currently applied to construct a mid-rise condo at the site that exceeds the city’s guidelines, Lookkong said.

“The main points were height and setback from the adjacent buildings—and the Beer Store coming back in its size,” Lookkong said, adding that density is also an issue.

“I know there’s parking and traffic. All these things will be addressed as secondary,” Lookkong said. This is not the only development that has been proposed in Cabbagetown South. Oben Flats is applying to develop an apartment building at Gerrard St. E. and Sherbourne St.

Gordon Henderson, a Cabbagetown South resident, owns the homes just east of the development with his partner.

They will be directly affected by the building’s height, Lookkong said.

The next CSRA meeting will take place in the fall.

Previous: A lesson from Jesus on learning
Next: Mackenzie House chalks up a history lesson