Posted by: Bulletin Editor July 15, 2018 Comments Off on Blood-sport of power vs. justice

Politics gets dirty even when it’s trivial. After observing the power politics inside the parties of both Democrats and Republicans over the past two election cycles, I am reminded of when I was first introduced to the blood sport. It was just a few months after I graduated high school.

My phone rang in the late afternoon on a Fall day. The chairman of the Election Committee for the Student Government Association was calling. He said, “It’s 5pm: the deadline for turning in expense reports, and I haven’t received yours.”

“Oh,” I replied, “I didn’t think I needed to provide one because I didn’t spend any money.” I was just a few weeks into my freshman year in college, and decided to run for class president. I had enjoyed student government so much in high school that I wanted to continue the experience into college. I was paying my own way through college, so I didn’t have money to run a campaign. I got together with two friends and we made eight or ten signs using the backs of old poster boards, pasted on cut-outs from magazines and comic books, and wrote some silly sayings we thought would make people laugh. Mostly I just asked people to vote for me.

“That doesn’t matter,” continued the SGA Election Chair, “you still have to file a report with zero as the total. You can be disqualified if you don’t turn one in.”

“I don’t want that to happen; I’ll bring one right over.” I got in my car, rushed back to campus and turned in the report less than an hour later. I thought that was the end of it…

…and it would’ve been, if I hadn’t won the election.

The election was held a few days later, and I won by a large enough margin to avoid a run-off. There were five people who ran, but the candidate who came in a distant second was a fraternity member. More than 95% of the SGA representatives were members of fraternities and sororities. Before the day was over, I received notice that I had been disqualified for turning in my expense report after the deadline. The fraternity member was declared the new winner.

It seemed so unjust that I went to see the Dean for advice. He told me that I could appeal it to the Student Court, so I did. The Student Court (also made up of a majority of Greek-letter organization members) referred it over to the Student Government Association for a vote. I was told that I’d be given an opportunity to present my case before the entire body.

I asked my friend Ken Frankel, a pre-law student at the time, and the son of an attorney to represent me. Ken and I consulted with his dad, who recommended that we should argue, “the punishment should fit the crime.”

On the day of our hearing Ken did just that. He passionately explained to the SGA how I was young, naive, and didn’t understand the rules, however once they were explained to me – I promptly complied. He said it was unfair of them to disqualify me after I won, that if missing the deadline were so important then I should have been disqualified before the election. He agreed that I broke the rule, but that it was because of ignorance not intention. He stated that they would not just be punishing me, but everyone who voted for me. He asked them to find a more appropriate penalty that wouldn’t take away the voice of so many students.

His plea was followed by some lively discussion, but mostly from the few independent members of the body who felt that I should not be denied the office I had won. The fraternity and sorority members insisted that I broke the rules, that rules are rules for a reason, and there can be no exceptions. Other than those few independents, all the votes went against me.

It was over. That evening we shared the results with Ken’s father. He looked at me and said, “Son, you’ve just had your first taste of politics.”

A nasty taste indeed. It seems that the desire for power – even if it is only to sponsor dances and other student activities – trumps empathy, justice, and reason. Never again, would I have any interest in student government. Nor would I have any interest in joining a fraternity (something I had once wanted but couldn’t afford). I would forever remain a Gamma Delta Iota.

— Robert Evans Wilson, Jr. is an author, humourist-speaker and innovation consultant. He works with companies that want to be more competitive and with people who want to think like innovators. Robert is the author of …and Never Coming Back, a psychological thriller-novel about a motion picture director; the inspirational book:Wisdom in the Weirdest Places; and The Annoying Ghost Kid a humorous children’s book about dealing with a bully. For more information on Robert, please visit http://www.jumpstartyourmeeting.com 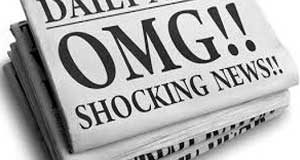