What’s the lesson of the Red Sea parting?

Posted by: Bulletin Editor October 13, 2017 Comments Off on What’s the lesson of the Red Sea parting?

“Moses holded out his stick, and it splitted up,” says Jessica, age 6. “It was a miracle when Moses put the stick into the big sea,” adds Hillary, 6.
Gee, I wonder whether Teddy Roosevelt was thinking of Moses when he said, “Speak softly and carry a big stick; you will go far.”
Indeed, Moses did go far, but it wasn’t because he depended on his big stick. Forty years before, he had

relied on his own strength when he killed an Egyptian who was beating a fellow Jew. But now, when the Lord told him to lift up his rod and stretch out his hand over the Red Sea, he obeyed and trusted in the power of God. Read Exodus 14 for the full account.
“If you trust God, he will help you in sticky situations,” says Rachel, 11. Does this include wet situations, as well? Sticky or wet, there are times in life when we face impossible circumstances.
“Trust in the Lord even when you are scared,” says Shannon, 11. The Bible tells us the people of Israel were “very afraid”—so much so that they harassed Moses and asked him whether he’d brought them into the wilderness to die.
Moses told the Israelites to “stand still and watch the salvation of the Lord.” Sometimes, the most difficult thing to do is nothing—not passivity, but active faith that stands on tiptoes watching for what God is going to do.
“It means to me that no false god can overcome the true God,” says Michael, 10. The big showdown with the gods of Egypt started with another big stick. This one belonged to Aaron, the brother of Moses. He threw his rod down before Pharaoh, and it became a serpent. Although Egypt’s magicians imitated the miracle, they probably didn’t count on their snakes being eaten by the snake God made from Aaron’s rod.
I wonder whether Aaron’s motto became “Speak softly, and carry a big stick that eats other big sticks.”
“The lesson (of the exodus) is if you need the Lord’s help, call upon him, and he will help you,” says Amber, 11. Throughout the Bible, the people of God are known as those who call on the name of the Lord.
For the prophets, Jesus and the New Testament apostles, Israel’s physical salvation at the Red Sea became a code word for salvation. Israel’s prophets constantly appealed to the exodus as the basis for calling the nation to obedience. The yearly Passover feast commemorated the salvation of Israel’s first born. The angel of death passed over those houses whose entrances were marked with lamb’s blood.
John the Baptist called Jesus the Lamb of God who takes away the sin of the world. At the last Passover meal, when Jesus ate with his disciples, he used the bread and the wine of the Passover feast to symbolize a new covenant based on his sacrifice.
The wine, Jesus said, represented his blood, and the bread his body. He was the true Passover lamb to which all the previous sacrificial lambs had pointed. Those who have his blood over the doors of their lives will experience an exodus when death comes knocking.
Think about this: Jesus is the Passover Lamb of God and the exodus from death.
Memorize this truth: “For indeed, Christ, our Passover, was sacrificed for us” (I Corinthians 5:7).
Ask this question: Have you applied the blood of the Lamb to your life by trusting in Jesus alone as your exodus from death?

Previous: Taking the air out of Airbnb Toronto
Next: Downtown pre-winter road work

How does remaining In God’s word make you free?

Jesus is a River of Living Water In your life 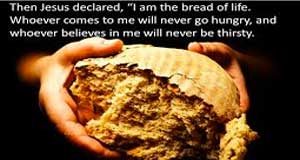 Why did Jesus say, ‘I Am the Bread of Life’?