Bell in Brief: Local theatre made its first bow at Frank’s Hotel

Posted by: Bulletin News May 30, 2017 Comments Off on Bell in Brief: Local theatre made its first bow at Frank’s Hotel

Downtown Toronto’s first local theatrical performance with a cast made up entirely of local actors took place in 1820.

That first play was a production of “The School for Scandal”by Richard Sheridan. It was put on in a back room of the popular Frank’s Hotel, a site that is long gone from our Old Town streetscape.

Frank’s Hotel stood facing Market Lane Park just north of Front between Jarvis and Church streets. Back then you entered the theatre using an outside staircase that was located approximately where today the household cleaning supply aisle of the Metro grocery store in Market Square offers up Borax and Brillo pads.

The first manager of Frank’s was a Mr. Talbot. His wife—Mrs. Talbot—was the first star of the Toronto stage with her most famous role being “Little Pickles” in a comedy of the same name.

None of the history books I’ve read mention their first names. Women who appeared on stage in the late 18th and early 19th century often had to use the prefix “Mrs.” rather than their first name so the audience would know that she was a “respectable” married women and had the permission of her husband to appear on stage. 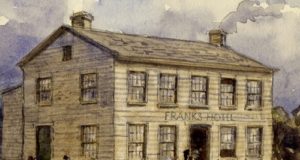 Frank’s Hotel was a popular watering hole for the people of early York (now Toronto) and in 1820 became the site of the first performance of a play made up entirely of local actors. 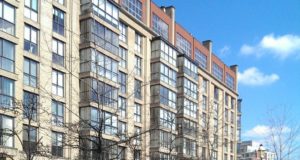 Today the Market Square complex built in 1980 is made up of condos, shops and theatres. It was once the site of Frank’s Hotel. Many other buildings have stood there over the past 200 years. 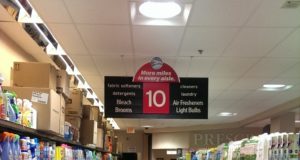 The household cleaning supply aisle of the Metro Grocery Store in Market Square is where Frank’s Hotel once stood.

Previous: Downtown Seen: Rev. Brinton’s retirement party at St. James
Next: 7 tips for growing a container garden on a balcony