Plans for The Well at Front/Spadina get council’s praise

Posted by: Bulletin News November 22, 2016 Comments Off on Plans for The Well at Front/Spadina get council’s praise 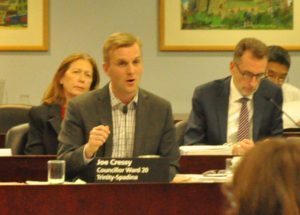 Downtown development proposals and their developers aren’t often praised by Toronto community council, especially when they override community and city wishes then appeal to the Ontario Municipal Board to get their way.

But praise is what Diamond Corp, Allied REIT, and RioCan got when their proposal for a self-contained community, on the Globe and Mail site at Front and Spadina, was given the council’s unanimous approval at its November meeting.

(The Globe’s new offices are on King St. E. near Corktown.)

“This is one of the best (development proposals) I’ve seen,” Cressy said.

The development, called The Well, is bounded by Front, Spadina, Wellington and historic Draper St. It has 7 mixed-use buildings with space for retail, office, 1537 condo units, underground parking and non-profit childcare for 57 children.

Council heard concerns about parkland for The Well being split into on- and off-site space. On-site space (310 square metres) is slated for a parcel on Draper St. Off-site space would be immediately across the street at 456 Wellington.

Toronto and East York District Planning Director Gregg Lintern said the project is “a very complex mixed-use development … The potential for landing a large contiguous open space on site was challenged by all the other attributes of the development.”

He said the final result, with the off-site land, is that it will hopefully lead to extensions of the open space network—that makes up a large part of The Well project—northward into the city’s future vision of the King-Spadina area.

Stephen Diamond, president and CEO of Diamond Corp, said 43% the project is publicly accessible. He said the project would provide 5,000 jobs and $20 million a year in the city’s portion of taxes.