St. Michael’s Cathedral on Bond Street has reopened after years of exhaustive renovations, making the cathedral today just as spectacular as when it first opened in 1848. 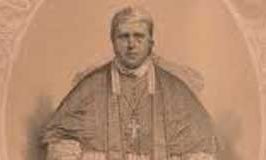 A century and a half of grime, coal dust, candle wax and just everyday pollution from a city that has grown massive was all scrubbed down to a sparkling tour de force. What was once a dark and shadowy interior with its architectural treasures hidden beneath the grunge of an emergent city has once again been brought out to the light. The result is stunning and a superb gift from us to the people of our past—and future.

In 1806 Fr. Alexander MacDonell, the only Catholic priest in Upper Canada, left Kingston to pay a visit to York which then had a population of only about 200. MacDonell realized there were 37 Catholics with no church and many had never seen a priest. On March 28, 1806 a plot of land on the northeast corner of George and Duke (now Adelaide) was granted from the Crown for the purpose of erecting a chapel for public worship. As the city grew so did its Catholic population. By 1841 then-Pope Gregory XVI chose a man who would become one of this city’s great legendary leaders to be its new bishop, Father Michael Power.

In a city with a population of 13,000, Bishop Power shepherded 3,000 Catholics. So what he wanted then was a new and larger cathedral where his growing flock could have Mass in the splendour of a magnificent surrounding. 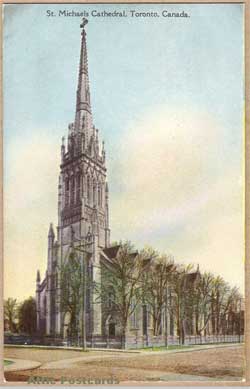 In 1845, Bishop Power wrote, “I have bought land in the centre of the city to build a cathedral.” Today that land onBond Street which, is now completely engulfed by a modern city, was then on the outskirts of town.

Under the watchful eye of architect William Thomas, work would commence to build St. Lawrence Hall in 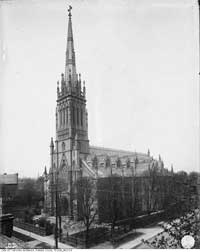 1859. Work began on the new St. Michael’s Cathedral on April 7, 1845. As was the practise in mediaeval cathedral construction, men from the community dug the foundation and finished off the workday feasting on a great ox barbecued on a spit.

On May 8, 1845 on the Feast of the Apparition of St. Michael, Bishop Power laid the cathedral’s cornerstone including some fragments of a stone pillar of the old Norman York Minster Cathedral in England.

Bishop Power contracted typhus and died on Oct. 1, 1847 tending to the thousands of famine Irish flooding into our city. He is buried in the crypt of his new cathedral.

St. Michael’s Cathedral was consecrated on the Feast of St. Michael Sept. 29, 1848 by Ignace Bourget, Bishop of Montreal, who sealed into the high altar relics of the first pope, St. Peter.

In 1850 the next bishop to take over was French-born Armand-Francois-Marie de Chabron de Charbonnel and under his guidance and influence the great cathedral was to come into its own.

Not only was Charbonne a count of a noble French family which had distinguished itself in the Second Crusade of the twelfth century and during the French Revolution but he was also related to St. Francis de Sales. 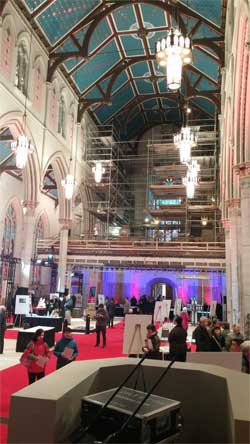 While the ruling Protestant elite detested anything Catholic and viewed them with suspicion, Charbonnel, Catholic or not, was held in high esteem for he was something most of the Protestant elite were not: an honest-to-goodness blue-blooded aristocrat.

Upon his arrival in 1850 Bishop de Charbonnel took one look at the rather bland interior of St. Michael’s and immediately set out to beautifying it; for after all, he was consecrated in the Vatican’s Sistine Chapel. Bishop de Charbonnel started by ordering from France the three east stained-glass windows installed in 1858 and the Stations of the Cross, which is why the language beneath each of the Stations is French.

Bishop de Charbonnel stayed on for 10 years, followed by Bishop His Grace, the Most Rev. John Joseph Lynch, who set out to complete Charbonnel’s vision of having a great Catholic Cathedral in Toronto.

He hired architects Henry Langley and his then-partner Thomas Gundry to construct the spire of St. Michael’s and in 1870 added the dormer windows to original architect William Thomas’s dramatically sweeping roofline.

While the dormers might have taken away some of the effect Thomas was going for—keeping the roof dormer-free—the light they shed on the interior can be quite breathtaking as the sun shines through onto a magnificently painted ceiling.

Lost and hidden beneath a century and a half of grime and soot, that stunning ceiling has been restored, hand painted and the result is breathtaking.

Today not only that ceiling, but the stained-glass windows, the icons, the doors, the crypt—everything top to bottom—has been meticulously either restored or rebuilt.

In honour of its rich history and overall beauty St. Michael’s was given a new title, that of Basilica. The new name bestowed upon it by Pope Francis is St. Michael’s Cathedral Basilica.

There are only two churches in Toronto with the title “Basilica,” the first being St. Paul’s Basilica on Power Street. There are only 21 in all of Canada. St. Michaels was rededicated on the Feast of St. Michael, Thursday Sept. 29, 2016, by Thomas Cardinal Collins, Archbishop of Toronto.

You don’t have to attend a Mass or even be a Catholic to view this incredible part of our history, for it belongs to everyone. Feel free to drop in. You are welcome there.