On October 17, 2016, the Caliph, His Holiness, Hazrat Mirza Masroor Ahmad was received by Prime Minister Trudeau at the Prime Ministers Office in Parliament Hill.

During the meeting, Prime Minister Trudeau expressed his pleasure at welcoming His Holiness to Canada. The Prime Minister thanked His Holiness for his continued efforts to promote peace worldwide and stated that his Government greatly appreciated the efforts of the Ahmadiyya Muslim Jama`at Canada and considered it to be an integral part of the nation.

His Holiness also said that he had listened to the Question Period in the House of Commons earlier in the day and noted that a number of the burning issues of today had been discussed and debated.

Your Holiness, your friendship and leadership is very important to Canada and we appreciate the way the Ahmadiyya Muslim Community condemns all forms of extremism.

Hazrat Mirza Masroor Ahmad recalled his previous meeting with the Prime Minister in 2012, which took place at the National Headquarters of the Ahmadiyya Muslim Jama`at Canada in Vaughan, Ontario. At the time, Mr. Trudeau was not the leader of the Liberal Party.

When I first met you in 2012 I prayed for you and said that I believed that one day you will be Prime Minister.

Further discussions then took place about the need for interfaith dialogue amongst different communities, and the importance of religious freedom and education for all people.

His Holiness expressed his concerns about the continued rise of extremism and terrorism in different parts of the world and the associated risks in the Western world. He said that he considered the 2008 global financial crash to be a major cause of the terrorism witnessed in the world today.

His Holiness said high unemployment and a state of financial desperation and hopelessness has led certain Muslim youths to become vulnerable to extremism. Thus, he said that providing job opportunities and helping people stand up on their own feet is a means of ensuring national security.

Hazrat Mirza Masroor Ahmad, in reiterating that all forms of terrorism and extremism were against the teachings of Islam, said:

If all Muslims followed the true teachings of their religion then no Muslim would ever be radicalized because the Founder of Islam, the Holy Prophet Muhammad (peace be upon him), said that to love ones nation was a part of Islamic faith. Thus, it is the duty of every Muslim to love his nation, to strive for its betterment and to serve it faithfully. That is why Ahmadi Muslims do not get radicalized because we follow the true teachings of Islam.

On October 17, 2016, Prime Minister Justin Trudeau had a one-on-one meeting with the Caliph, His Holiness, Hazrat Mirza Masroor Ahmad. During the meeting, His Holiness and Prime Minister Trudeau discussed common concerns about global unrest and Canadas role on the world stage. 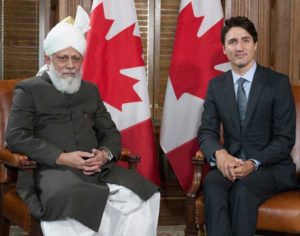 During his six-week tour of Canada, His Holiness will share the true, peaceful teachings of Islam with Canadians.

About the Ahmadiyya Muslim Jama`at:

Ford is right on cap-and-trade

Pierre’s silly son screws up all he surveys