Toronto community council approved at its October meeting a zoning amendment that would set the stage for a 53-storey office building between Bay and Yonge streets south of Front.
At the same time it asked for a traffic operations review of what the project might mean for traffic on The Esplanade.

She wants the review, done in consultation with herself and local residents, to look at vehicle infiltration onto The Esplanade.

The project is listed as 141 Bay St. and requires a zoning amendment. It would include a 7-storey base building and 443 parking spaces on a 5-level underground garage. The applicant is Frank Lewinberg and the owner Greater Toronto Transit Authority.

“There are thousands of residents living on this street representing much pedestrian traffic, and there are 3 major garages one block in from Yonge St. … with many vehicles that also travel along The Esplanade,” McDonald pointed out.

She said in some cases motorists are left to “play chicken” with each other as they try to wind their way through parked vehicles, including tour buses and commercial vehicles.

“It’s too narrow a street to allow 141 Bay St. to also empty out commercial vehicles and cars onto that,” she said. “This narrow street will become just a traffic relief valve.”

McDonald said city traffic engineers should make 141 Bay traffic that wants to head east go north on Yonge to Front St. which offers 4 eastbound lanes. “I want (them) to recognize The Esplanade has a limited capacity for additional traffic.”

Mark Jamieson, a traffic consultant with BA Consulting Group, spoke on behalf of the project.

He said Bay’s east sidewalk, with the amount of pedestrians that use it, is one of the busiest sidewalks in Canada. He said Yonge St. would offer a safer exit place for pedestrians and cars with its planned traffic signals opposite The Esplanade.

Jamieson added that most of the traffic exiting onto Yonge will be turning right to head south toward the Lake Shore-Gardiner combination and won’t be inclined to travel along The Esplanade.

McConnell reminded the meeting that The Esplanade’s history dates back to Toronto’s early days.

Front St. was the most southern street of Old Town Toronto “but The Esplanade was a walkway. It was the pathway where people walked along the lake. That’s where the lake was,” McConnell noted.

She said she wants to make sure The Esplanade doesn’t end up being “somebody’s back lane. It’s a beautiful, beautiful space … It was the place in which citizens of our beginning town would walk and enjoy the scene.”

141 Bay is the second phase of a larger redevelopment that includes a 48-storey office tower at 45 Bay and an elevated open space over the railway tracks.

Under Section 37 of the Planning Act, the city wants the developer to pay $4 million toward the construction of the new Jack Layton Ferry Terminal and $1.5 million toward streetscape improvements. 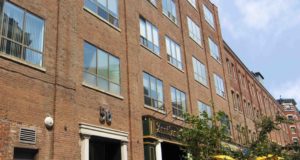