When she stepped up to the podium at HotHouse Restaurant & Bar on March 9. A slender, compassionate Linda McQuaig told an overflowing room at her St. Lawrence Dinner Club talk that Canada is in a “long dark tunnel” during “the Harper era.”

“I cringe when I think of [how Canada will be] past the Harper era. It’s the worst government we’ve ever had in this country; a menace to this country and to our lives.” 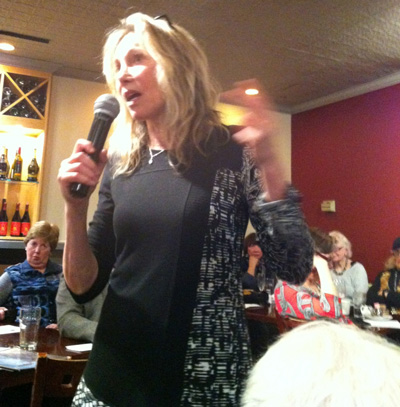 She continued on in that vein for some time. It was uncontested in an audience bottom-heavy with senior members of the St. Lawrence Neighbourhood-based supper club and among the most vulnerable Canadians to the lies and deceits of the current Tory regime.

McQuaig is running for the NDP in the new Toronto Centre federal riding against Liberal MP Chrystia Freeland who won a recent by-election victory against her and is Justin Trudeau’s shadow finance minister.

A Tory will be on the ballot also, but Tories stand no chance in that riding.

McQuaig is a renowned journalist and author of several books. Her progressive leanings are well known and those are what she tilts into the Harperites.

She cites Harper’s nascent, terrifying anti-terrorist act as a precursor to the police state he and the Tories, supported by many Liberals, hope to foist against our freedoms:

“Harper will  use it to attack his enemies. It’s an agenda to shrink and cripple government. It’s done by starving it of funds. That started under the Liberals and worsened under Harper.”

Terrorism, she notes, is a boon to them. A war against a ubiquitous enemy is the best thing a villainous regime can invent or metastasize.

The 911 terrorism events in the U.S. were a godsend for a dingbat of a president who could get confused tying his shoelaces. “I am a war president,” George W. Bush announced shortly thereafter as his image surged.

Though he oversaw a nation whose fabled air force didn’t cope with supposedly aircraft-borne terror, and strangely dissolving skyscrapers, Bush was redeemed by a fearful electorate who, aided by corporate-controlled voting machines, returned Bush to a second term.

A lower—Canadian-style—octave of that re-election strategy is at play with the recent deaths on native soil of military personnel by lone gunmen.

Stephen Harper is making the most of it and whipping up a police-state style frenzy because a police state is very much his style.

(“Beware the wimp,” my mother Kathleen Touby warned me in my youth. By that she meant those who speak mildly but bear unseen malice and convey a false image of softness. Like the piano-guy who occupies Parliament Hill.)

Harper, said McQuaig, will use the anti-terrorist legislation if it passes to attack his enemies. “Harper has whipped Canadians into a frenzy of (terrorist) fear.”

The assault on the non-rich is a special feature of the regime.

“It’s done by starving government of funds. That started under the liberals and worsened under Harper.

“There will be 2-tier medical care if Harper wins a majority. It won’t be immediate. The mechanism to do that takes place in 2017.”

McQuaig continues, noting that Harper takes an elitist approach to government. Income-splitting is an example “for rich couples who get a break that only benefits 15% of the population: the richest!” It carries a cost of $4 billion that could benefit the homeless but instead goes to the very rich with a stay-at-home spouse.

The NDP, she says, supports a national child-care program, $15 minimum wage and restoration of medicare. Plus renewed funding for co-ops.

The Dippers, she adds, would put in place a “national pharmaceutical program” that “would save Canadians as a whole billions of dollars a year” using the federal government’s buying power to slash costs from the drug giants.

On the current crop of free-trade deals being made behind closed doors between the Tories, foreign governments and selected corporate lobbyists, McQuaig says the NDP wants increased trade: “We favour more trade but getting rid of corporate privileges” that let business interests sue government for interfering with their profits when enforcing public policy.

The NDP would go in the opposite direction with the trade deals than Canada did with NAFTA.

Regarding the current free-trade deals with Europe and Asia that are being handled in secret with only a few political operatives and corporate elites framing the rules: “The EU is giving even more away, capitulating to the drug lobby.”

“A fundamental problem in politics is the influence of money. Canada is better than the U.S. But Harper opens the door to more money politics.

“He killed the truly democratic part of our election financing system: When you voted you could direct $2 to the party of your choice. Harper killed that. He raised the contribution level; this increases the power of the rich.”

Harper also makes it harder for marginal people to vote, she added. 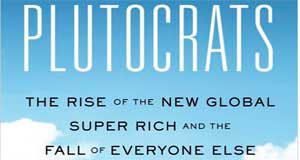 Is the CETA free-trade deal treasonous?