How powerful Is God?

Posted by: Bulletin Editor March 2, 2017 Comments Off on How powerful Is God?

“God is so powerful he could break this school in two,” says Kyle, 6. It sounds like it’s a tough day at school, Kyle.

“God is so powerful he can be the best pilot in the Navy,” says Zach, 7. I’m sure the midshipmen at Annapolis will sing “Anchors Aweigh” when they read this.

“God is so powerful, he could destroy everything he made in the blink of an eye,” says Sarah, 11.

That’s an eye-opening thought and a sobering one. It’s easy to forget the awe-inspiring glory of God’s creation amid the bright lights and manmade structures of the city.

The Bible portrays the immensity of the heavens as the mere finger work of an all-powerful God (Psalm 8:3). We quake with fear at the destructive power of an atom 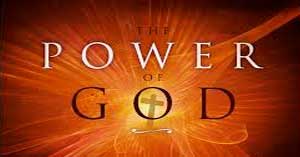 bomb, but we forget that God spoke and worlds came into being.

When it comes right down to it, “God is so powerful, he can do anything he wants to,” says Moriah, 11.

While the mythological gods of the ancient Greek pantheon often appear capricious in their exercise of power, the God of the Bible acts consistently with his goodness. Lately, I’ve found myself thinking about God’s grace in the restraint of his power. Would any of us be here if God immediately judged us for our sins against him and others?

We can see God’s power every day in creation, but what about his ability to deal with a jealous co-worker or an obnoxious relative? Can I trust God to deal with people who get under my skin? Is God’s power in me so great that I can pray for my enemies instead of plotting their destruction?

“God is so powerful he made all the people on the earth different colors, and the animals furry and different types,” says Taylor, 7. If God didn’t like diversity and variety, he would have made us all alike.

“God says that He is all powerful. He always does what he promises!” says Lacey, 11.

The Bible contains more than 30,000 promises. When Christians link the power of God with the promises of God, they will enjoy the peace of God. Every test we face for the strengthening of our faith boils down to believing a promise from God. We build our character by proving his character when we face the unknown by standing on His promises.

“God is so powerful he let Jesus die on the cross and let him rise again,” says Adam, 10. Yes, now you’re seeing something paradoxical. This shameful crucifixion, a criminal’s death between two thieves, looked like humiliation and defeat. It was the power of a love so great that God spared nothing (not even his only Son) in his efforts to restore harmony with us.

Think about this: Angels must have strained with anticipation and fingered their swords as they waited for a command from Jesus to strike down the Roman soldiers who nailed him to a cross. The command never came.

Katy, 7, sums it up when she writes, “God is so powerful he can take away our sin.”

Memorize this truth: “For I am not ashamed of the gospel of Christ, for it is the power of God to salvation for everyone who believes, for the Jew first and also for the Greek” (Romans 1:16).

Ask this question: Do you know the power of His forgiveness in your life?