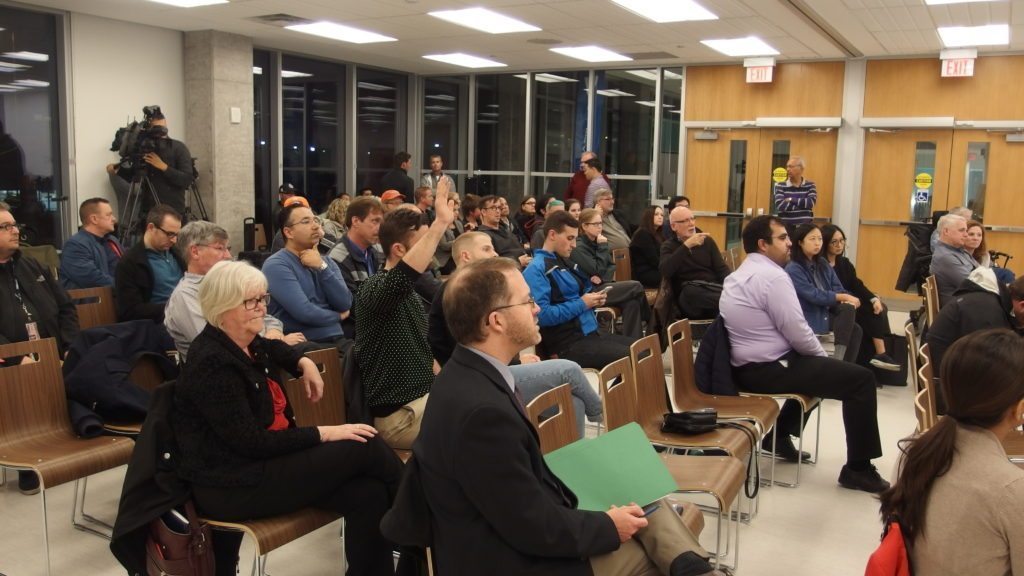 A crowded hall at Cooper Koo YMCA in Corktown for the public meeting with the TTC on streetcar noise on the Cherry Street. — Eric Morse photo

A meeting between Corktown and Distillery District residents and TTC officials held Nov. 16 to discuss streetcar noise issues on the Distillery Loop end of the new Route 514 inaugurated June 19, demonstrated, if nothing else, that the views of area residents are divided on the issue, and that streetcars do squeal on turns because of some inexorable laws of physics, and that they are likely to continue doing so if perhaps at diminished levels in future.

The meeting, which became fairly noisy at times, was united on one issue: streetcar noise, specifically squealing on turns, is a problem. However opinion then divided essentially three ways: those who live in the immediate vicinity of the King/Sumach intersection turn, which is the crux of the issue, who want the noise (or if necessary the streetcars) removed immediately, those not in the immediate vicinity, who find the noise irritating but would settle for mitigation over a longer term, and the disabled community living in the area who, as Emily Daigle told the meeting, place accessible transport ahead of noise mitigation and are, by and large, willing to live with it.

At this point, as a stopgap measure, the streetcars have been stopped after 10 pm and before 7 and replaced by Wheeltrans buses, which led to a sidebar discussion over whether that is not diverting Wheeltrans buses from their proper clients, and whether kneeling buses should not be used. (The response from TTC officials was that using Wheeltrans vehicles in the short term is not creating an unreasonable overload but that there are not enough buses in the fleet (and it requires 2 buses to carry the load of one short CLRV streetcar) to sustain the extra route for long.

During the discussion it emerged as something of a revelation from by Head of Streetcar Operations Steven Lam that the major source of the noise on turns is simply that the streetcars, like all streetcars in service around the world, are built in exactly the same way that railroad cars have been built since streetcars were introduced to Toronto in 1892. (In fact, as TheBulletin.ca has since verified, they have that in common with all railroad cars since the railroad itself was introduced in the 1830s.) That is, they have a solid axle; the two wheels do not rotate independently, so that the inner and outer wheels on a turn are still trying to rotate at the same speed, causing steel-on-steel slippage plus some sideway friction. This is scarcely noticeable on a railroad with gentle curves, but as Lam noted, the inside radius of TTC streetcar turns is very sharp, between forty and forty-nine feet. (An average European turn is closer to 85 feet, thus producing less noise).

Lam then added in response to audience questions that independently-rotating wheels, seemingly a simple enough fix, are not a solution because the switches in the system (again like streetcar switches everywhere) are one-point design – that is, only the inner rail is switchable, while the outer wheel simply follows its mate into the alternate groove. With over 100 switches in the system, the cost of re-engineering both fleet and tracks would be prohibitive.

TTC representatives noted that to this point they have brought in a third-party consultant to monitor sound, replaced a noisy switch at King/Sumach, continued with rail-grinding and alignment experiments, and installed lubrication equipment at the Distillery Loop. They also noted that the one new low-floor car on the route has its own lubrication system and the TTC has committed to running only the new cars on the route by second quarter of 2017 (assuming that Bombardier delivers on schedule). However In correspondence with King/Sumach resident Jason Mednick, TTC head Andy Byford has gone on record as saying that he cannot guarantee the complete removal of noise in the turns.

Interviewed by TheBulletin.ca, Councillor Pam McConnell commented that the environmental assessments and community consultations for the 514 route began as early as 2005 and that the community was fully involved in consultations at every step. McConnell said that the 514 is essential to King Street operations, quoting TTC figures published in the Toronto Star showing the 514 as sixth among routes exceeding weekday overcrowding standards. She also noted that in the medium term, demand will increase as Don Valley West housing builds up and that in the long term a linkup between the 514 and the projected Queen’s Quay East LRT line is on the city’s to-do list. McConnell emphasized that in light of these considerations, abolition of the service is not an option.

Previous: Letter: On the glamour contest that was the US election
Next: How can you give thanks in everything?