The award – a sculpture – is presented for “unique lifetime achievement that has enriched the international performing arts through distinguished service within the profession.” The citation in the official ISPA program reads, “Cross generational and cross regional, Ann Summers Dossena has arguably promoted/developed more artists and arts leaders than any one individual alive today. Her commitment to the performing arts has spanned 60 years – it is an honor to acknowledge her contribution.” 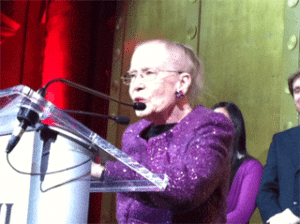 Summers Dossena is the first Canadian to receive this honor, since the award was launched in 1996. Past honorees have included such illustrious names in the performing arts as Maestro José Antonio Abreu, founder of Venezuela’s acclaimed El Sistema; Sir Clive Gillinson, CEO and artistic director of Carnegie Hall; Harvey Lichtenstein, who built the Brooklyn Academy of Music into a showcase for such cutting edge performances as the New Wave Festival; acoustician and theatre designer Russell Johnson; artists’ manager and consultant Edna Landau; singer Miriam Makeba; Mexico’s Palacio de Bellas Artes; and the late Iranian-born opera director Lotfi Mansouri, one time director of the Canadian Opera Company.

The honor comes two years after Summers Dossena was presented with the first Manager of the Year Award by NAPAMA – her colleagues in the North American Association of Performing Arts Managers and Agents. It is also a few months since announcing her retirement after 55 years in artists’ management, in October 2013.

In accepting the International Citation of Merit from ISPA, Summers Dossena saluted the organization, noting “We have all grown through our exposure to the diversity of our members, and our meetings in various cities and countries.” Quoting American philosopher and lecturer Oliver Wendell Holmes, she added, “‘Man’s mind (and women’s, too), once stretched by a new idea, never regains its original dimensions.’”

Ann Summers Dossena has made it her life’s work to open minds to the arts while expanding opportunities for performing artists. After a lifetime of innovation and initiating programs primarily in the music world, she is dedicating herself to the International Resource Centre for Performing Artists (www.ircpa.net). She founded the non-profit, charitable organization in 1983 (incorporated in 1985), with the stated goal of “Turning potential into accomplishment” for emerging artists.

Summers Dossena sees an IRCPA home and its programs as filling a crucial need, particularly for classical singers and dancers, whose careers tend to be shorter than most, as well as for instrumentalists. “Who do you know that must pay for a job interview?” asks Summers Dossena. “Or wait two years for a first job? Yet, these are the challenges. Rental of a space for an audition, and hiring a pianist are costly. Add to this the fact that employers, such as orchestras, opera companies and concert series, book their artists two to three years in advance.

“Emerging professionals need a place to come together, exchange ideas, gain confidence, be mentored by working professionals who can pass on their career experiences, set short and long term goals, and to know they are not alone in their endeavors,” adds Summers Dossena.

The IRCPA focuses on the first three-five years of an artist’s career, after their training. As well, it is there to help artists in mid career, and later, in retirement.

Amongst IRCPA programs are Encounters with Employers, which offer young artists advice about their employability or allow them to explore new directions without risk to their career. Career Moves give insights to the workings of the arts industry, and aid in planning and career development.

The IRCPA’s most recent project was the Canadian Day event in Rome in July 2013, in which 13 artists made their Rome debut performances.

Celebrated Canadian singers, sopranos Adrianne Pieczonka and Isabel Bayrakdarian, and tenor Colin Ainsworth are among the alumni of the IRCPA.

The IRCPA is currently seeking both space and the funding to sustain it, so that these programs and others can occur on a regular basis. More information is at www.ircpa.net.

Ann Summers Dossena is an honorary life member of the International Society of Performing Arts (ISPA), founding member of the North American (formerly National) Association of Performing Arts Managers and Agents (NAPAMA), and a member of the League of American Orchestras, Orchestras Canada, Canadian Arts Presenting Association (CAPACOA), the CCI Network (Ontario Presenting Network), Canadian Italian Chamber of Commerce in Ontario, Team Italia Canada, and the Canadian Club of Rome. She is also the author of the book Getting It All Together (1985, Scarecrow Press), a second edition of which will soon be released.

Previous: Workshop on how to lobby
Next: Are you a skilled restaurant manager? Subway wants you!