Posted by: Bulletin Staff March 29, 2016 Comments Off on Bike lane extension left in limbo by council 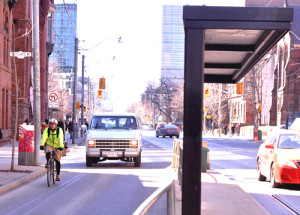 City Council agreed in March to remove the streetcar islands on College St. at Bay but took no action on a resident group’s suggestion to extend College’s popular bike lanes for another 2 blocks between LaPante Ave. and Yonge St. when the work is done.

Removing the islands east and west of Bay would widen College St. to accommodate the lanes, Rick Whitten Stovall, president of the Bay Cloverhill Community Association, said in a letter received by councillors.

“The College St. bike lanes are the heaviest used bike route in Downtown Toronto,” he said, noting his community has 12,000 residents and another dozen residential towers under construction.

He said the lanes serve major employers such as the University of Toronto, Ryerson, the hospital district and the Ontario Legislative Building.

“It may be best to reconstruct College St. so that a protected cycle track at sidewalk level can be provided from LaPlante (Avenue) to Yonge St.,” Whitten Stovall suggested.

He said the extended lanes could connect to the Bay St. bike lanes “and a potential revisioned and shared Yonge St. (There is talk about making Yonge more attractive to pedestrians and cyclists and less car-oriented.)

The work, expected to begin this summer, is necessary because “the current platforms will generally be unable to accommodate the TTC’s new low-floor streetcars and be fully accessible,” the report said.

The BCCA isn’t giving up on its request to have the bike lanes extended, Whitten Stovall said in an email to The Bulletin. The BCCA “supports continuation of the bike lane once the streetcar platform is removed so the College St. lane will run throughout Downtown.”

Previous: Pig Save activist Krajnc called back to Milton courthouse May 10
Next: Esplanade bus will still run: McConnell