Further, bike lanes are for most a fair-weather option. Bike-users pay no road taxes and proliferate only in good weather, which doesn’t describe Toronto’s year-round climate.

Reserving bike users to side streets makes sense and that’s the option Toronto should adopt.

Also, requiring bike registration, insurance and licence fees is only sensible and fair, especially considering the huge expense and disruption caused by cyclists in some areas of the city such as Harbourfront. (And no, they’re not in the same class as pedestrians so there’s no call for a pedestrian licence since that’s paid for by their taxes.)

As an untaxed citizen group, cyclists should be regarded and taxed as vehicular users of Toronto streets.

During Jennifer Keesmaat’s reign as city planner, Toronto wasted a fortune on pretty but little-used bike infrastructure on main streets.

As for the stalled Bombardier streetcar order: Perhaps it’s actually a good-news story that streetcar deliveries are hung up. Streetcars are ridiculous on a busy city street. They stall traffic and so often are mostly empty except during rush hour. Buses, including electric trolleys like Toronto had when I came here in 1981, are much more sensible because they are articulate and don’t halt traffic because they can move to a curb for passengers just as diesel buses do.

The next wrinkle in vehicular options is battery-powered self-driving cars and trucks. That’s getting closer to reality and it will put even more motorized vehicles on our streets that shouldn’t have to squeeze in for bike riders or try to dodge around traffic-clogging streetcars.

Your comments are welcomed. Email cbnews@yahoo.com with your viewpoint on this issue. Include the words “on bike lanes”. 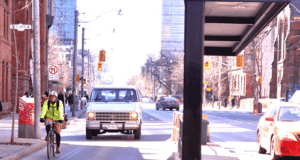