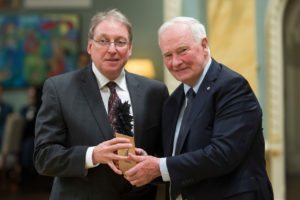 Dr. Paul Santerre is a scientist, entrepreneur and an innovator. He’d have to be all three in order to succeed today in the world of biomedical science.

The Yonge and Wellesley resident has recently been recognized with the 2017 Governor General’s Innovation Award for one of his own innovations: adding a unique compound to medical devices to help reduce blood clotting, thereby avoiding potentially lethal complications.

Success (and saving lives) does not happen overnight–and maybe more so in scientific industries where eureka discoveries can take years, even decades, to become part of the mainstream consumer market.

Santerre started down the road to his successes when he created his first product, Endexo, which is now used in Canada, USA and Europe. That product began decades ago with the help of previously published scientific articles and laboratory work.

“We are riding off the coattails of three decades worth of research,” Santerre told The Bulletin. “Not all my research that I’m riding on, but the knowledge gained that started in the late 70’s of looking at proteins of blood and how they absorb on surfaces and the phenomena of clotting and why that is happening. We used all that knowledge to drive the creativity of our innovation when we had our early ideas in the 1990s.”

Originally Santerre approached a large company with his innovation but they showed no interest. With no prospects, he decided to collaborate with a smaller company and eventually he co-founded the prosperous Interface Biologics Inc. This company continues to collaborate with other firms worldwide on scheduling of products coming into the marketplace in short order.

Thanks to Santerre’s proven business savvy, he was asked to teach students at the University of Toronto how to turn their scientific discoveries into a product and business model that will enable them to continue with their inventions. Today his course is comprised of 70 companies with approximately 100 students participating.

“We have our own efforts here at the University of Toronto,” Santerre explained. “We have nine incubators for undergraduate and graduate students to be teaching them in a co-curricular manner how to go about building their own company. Taking edgy science and turning it into a practical product. It’s a real cultural change and it’s exciting.”

Santerre, along with his hectic academic life, still finds quality time to spend with his wife, two grown children, his Pug dog, Oliver and his two cats.

You can read more about Dr. Paul Santerre at https://innovation.gg.ca/en/Winnerscommitee. 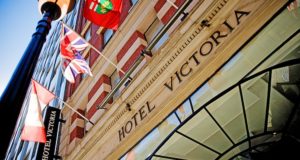 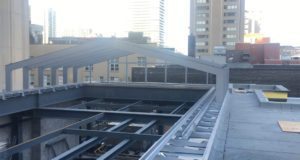