Bruce Bell: Berczy Park has its own hard-to-pronounce back story

Posted by: Bulletin News April 7, 2017 Comments Off on Bruce Bell: Berczy Park has its own hard-to-pronounce back story 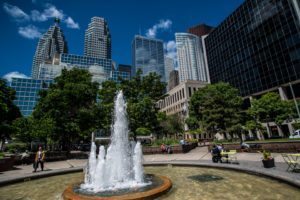 Berczy Park behind the Flatiron Building (Front, Wellington and Church streets) has a very confusing-sounding name which over the years I have heard pronounced a few different ways, including “Bear-ski,” “Bear-tzee” and “Berk-see.”

However one of the men responsible for the park’s creation some 30 years ago—the late great developer Philip Greey—once told me to think of a bear on skis. Hence “Bear-ski” is the pronunciation I pass on to others.

This vibrant inner city park has just undergone a massive transformation is named for a man who was just as enigmatic as the pronunciation of his namesake park.

William von Berczy (born Joann Albrecht Ulich von Moll in 1744) was one of 6 children born to a rich nobleman in Saxony.

The von Molls moved to Vienna where young William dutifully studied art and architecture but his passion was for adventure and by the age of 22 was working as a spy in Poland.

As legend has it, by the time Russia invaded Poland, Berczy had escaped to Turkey where disguised as a woman found employment in the harem of the Sultan.

Either the Sultan had too many women and never noticed him but our hero managed to live amongst them for a year (working in the kitchens) after which he was bought by Hungarian bandits and went on to live with them in a cave for six months.

By 1791, after living by his wits with the bandits, he decided to get into the people-smuggling business.

In the latter part of the 18th century Germans weren’t allowed to leave their country so William using an empty ship as a decoy gathered 60 German families and sailed for the New World.

He settled first in Genesee County. Circa 1792 he arrived here in Upper Canada with his German families. He was granted what would be Markham Township for settlement.

John Graves Simcoe, our first lieutenant governor, also promised Berczy 64,000 acres of land near the Rouge River and in return Berczy was to lengthen Yonge St. (first begun by Simcoe’s Rangers) north to the Holland Marsh.

Famine, malaria and numerous injuries slowed progress. When Berczy failed to finish the job on time, Simcoe refused to pay him and demanded that all the Berczy land be sold off with the money going to the government.

Berczy—the man who cleared the land for the original 10 block town of York site, constructed 35 of the original 40 houses and built the first bridge across the Don River—was now penniless was thrown into debtor’s prison.

After his release, Berczy and wife Charlotte (together with their two sons William and Charles) left for Montreal where he managed to eke out a living as an artist.

It was then that William Berczy became one of the finest Canadian portrait painters of his time. His most famous painting—that of Joseph Brant (c1807) the great Mohawk leader—hangs today in the National Gallery in Ottawa.

In 1811, Berczy went to New York City to try and sell his manuscript The Statistical Account of Canada, a book he had been working on for the past 20 years. In late 1812 while still in New York he went missing. Some say he was murdered over a bad debt or in a deal gone wrong. Or maybe the Sultan’s men had finally caught up to him.

Berczy died in 1813. He was ostensibly buried in the Trinity Church cemetery in Manhattan (the church served as a refuge during the 9/11 attacks). However, a few years after his death his widow Charlotte had his coffin dug up to find it was filled only with rocks and stones.

To this day, no one knows what really happened to him. His marker is still there at Trinity Church alongside Alexander Hamilton (George Washington’s Secretary of the Treasury who died as a result of his infamous duel with Aaron Burr) and Robert Fulton (the inventor of the first commercially successful steamboat).

Eventually his sons moved back to Toronto where eldest son William Bent Berczy became a member of the Town Council.

In March of 1834, it was William Bent who first proposed that the Town of York, now on the brink of becoming a city, should revert back to being called Toronto because “it is the old, original name of the place and the sound is in every respect much better.”

Ironically, it was Simcoe 41 years earlier who decided that the name Toronto was “too Indian” sounding and had it changed to the more British sounding York.

Younger son Charles became the founder of Consumers Gas and on Dec. 28, 1841, lit the first street lamp in front of what is now the Flatiron Building, bringing Toronto out of the dark ages.

Today, William Berczy is remembered as the founder of Unionville, Ontario, where parks, schools, streets and even an entire community Berczy Village bear his name. There’s also the Markham Berczy Settlers Association dedicated to those forbearers who came with William Berczy to that part of the province.

A small street next to the King Edward Hotel was once named Berczy Lane but later changed to Leader Lane after the 19th century newspaper “The Leader” which had its offices there.

It took almost 200 years for Downtown Toronto to pay tribute to the Berczy family with the opening of Berczy Park in 1982 on land that during most of the 19th and 20th centuries was filled with banks, warehouses, stores and hotels.

By the time the 1960’s rolled around these once elegant structures were slowly crumbling into dust and were eventually demolished making room for a massive parking lot.

However when plans for the re-development of the parking lot were announced in 1973, an enormous three-level parking garage with a green park on the top level was proposed.

If it weren’t for the protests emerging from local heritage minded developers like the late Philip Greey who were then witnessing first hand the destruction of the Old Town, that hideous parking structure was almost built instead of Berczy Park.

One of the park’s most striking features is the massive trompe l’oeil mural painted by Derek Besant which was painted 1980 and is mounted on the back of the famous Flatiron or Gooderham Building overlooking the park.

This spring, after a massive do-over, Berczy will reopen complete with a new fountain adorned with ceramic dogs spewing jets of water (in fact 27 dogs and a one cat).

The new Berczy Park has been redesigned by landscape architects Claude Cormier + Associés, with its rolling hills, new and old trees, and that incredible fountain is a perfect tribute not only to the Berczy family for to Philip Greey also. 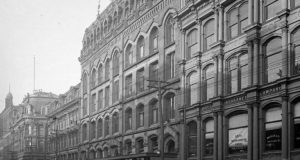 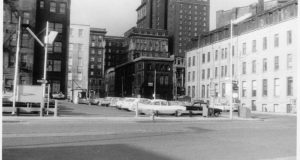 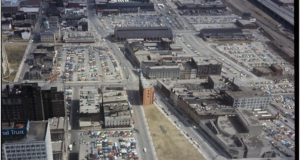 The area that would become Berzcy Park, circa 1971. 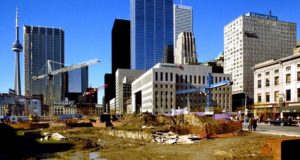 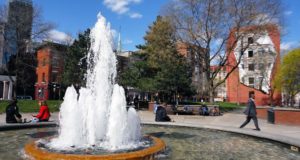 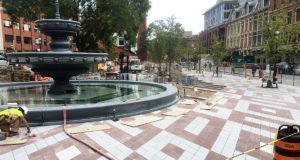 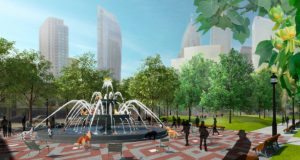 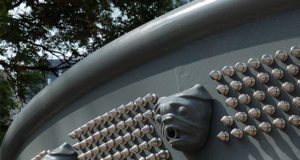 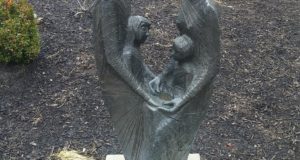 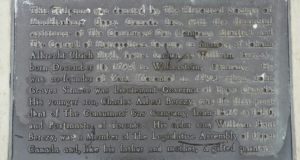