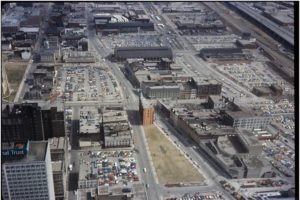 File consists of 16 photographs documenting redevelopment in downtown Toronto, focusing on the demolition of 19th century structures, mostly residences, as part of that process. These photographs include images of Old City Hall, the Don Valley and construction of the Eaton Centre at Yonge and Dundas streets.

2017-03-27
Previous: Bruce Bell: Berczy Park has its own hard-to-pronounce back story