How to tell false prophet from a true prophet?

Posted by: Bulletin Editor June 30, 2014 Comments Off on How to tell false prophet from a true prophet?

“You can’t tell a real prophet from a false one by whoever sings the loudest and prays the longest,” says Kris, 12. “You can even preach the best, but if the heart is not right, God can’t hear you. So it is hard to know a real from a fake prophet, but God knows.”

False prophets know how to impress people with outward shows of piety. As Kris said, God knows what’s going on in the heart.

“A true prophet is nice to others,” says Diana, 8.

Paintings and movies often portray Jesus as Mr. Nice Guy. We forget that long before power tools, he worked as a carpenter. I’ve never seen a painting of Jesus driving money-changers out of the temple with a whip.

The Bible is filled with stories of true prophets speaking tough words to belligerent audiences. John the Baptist lost his head. The prophet Isaiah was sawed in two. The prophet Zechariah was stoned. It’s not always popular to 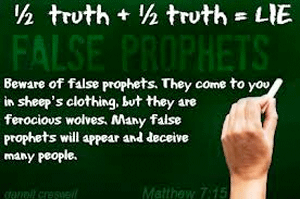 The problem with false prophets is that they usually tell partial truths. There’s a Yiddish proverb that says, “A half truth is a whole lie.”

Your first question to people claiming to be God’s spokespersons should be, “Who is Jesus Christ?” If they don’t confess him as fully God and fully man in one person, you can write them off as false prophets. As C.S. Lewis said, Jesus is a liar, lunatic or Lord. He can’t be just a good man or a prophet as some claim. Good men don’t claim to be God if they’re not.

“A false prophet may seem righteous at first, but he’s really not,” says Ally, 12. “Sometimes it’s hard to tell because they are so disguised and so innocent-looking. You really need to pray about it and ask God to direct you to which person to trust.”

Ally probably read what Jesus said about the false prophet wardrobe: “Beware of false prophets, who come to you in sheep’s clothing, but inwardly they are ravenous wolves” (Matthew 7:15).

Don’t expect a false prophet to appear as Darth Vader. Remember the story of Little Red Riding Hood? The big, bad wolf disguised himself in grandmother’s clothes. Don’t expect anything less from false prophets. Outwardly, they look as innocent as sheep, but inwardly, they’re ready to pounce and devour.

Jesus said you would know false prophets by their fruits. The fruit of the Spirit is love, joy, peace, long-suffering, kindness, goodness, faithfulness, gentleness and self-control (Galatians 5:22). Jesus also said words flow from a person’s inner self and eventually reveal who people are (Luke 6:43-45). Listen carefully.

Think about this: The Bible is our standard for testing anyone who claims to speak in the name of God.

Memorize this truth: “Beware of false prophets, who come to you in sheep’s clothing, but inwardly they are ravenous wolves” (Matthew 7:15).

Ask this question: Do you know God’s word well enough to discern whether someone truly speaks for God?