Posted by: Bulletin Editor March 2, 2016 Comments Off on What if Adam & Eve didn’t eat the Forbidden Fruit?

Amanda and Marci may have been reading the prophet Isaiah, who wrote of a time when the lion will lie down with a calf and eat straw like an ox.

Marci says if we were in the Garden of Eden, “Mosquitoes wouldn’t bite.” And it’s a good thing because Jennifer, 11, says, “We would probably be running around naked without thinking it’s wrong.” 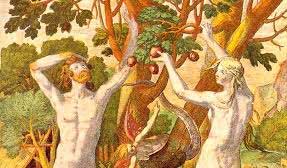 Hillary, 6, adds that Adam and Eve “wouldn’t have had to hide from God” if they hadn’t eaten the forbidden fruit.

We’re still trying to hide from God. Today, fig leaves take many forms: a better job, a bigger house, a more exotic vacation or a different spouse. Even when we’re trying to hide, God always finds us.

If Adam and Eve hadn’t committed that first sin, says Chris, 11, “God would walk with us.” And that means, as Kelly, 9, puts it, “We would be having fun and worshipping God.”

Kelly, I’m so glad you used the word “fun.” Many people associate worship with putting on a long face and listening to boring sermons.

In contrast, King David wrote: “In your presence is fullness of joy; at your right hand are pleasures forevermore.” David loved God so much that he danced before the Ark of the Covenant as it came into Jerusalem.

No wonder God called David a man after his own heart. Although David sinned, he knew the joy of abiding in God’s presence. In Psalm 23, David wrote, “And I will dwell in the house of the Lord forever.”

If our original parents had obeyed God, “there would be no homeless people or people that live in the streets or unhealthy people,” says Kyle, 9. “All our needs would be provided in our backyard,” adds Chris, 10.

In Eden, maybe Chris would never have to buy groceries. But even there, God told Adam to “keep and tend” the garden. It involved work but not anything like the effort required for most modern jobs.

God punished disobedience by cursing the ground. Then, God said, “In the sweat of your face, you will eat bread.” Following our own way is full of mental, emotional and physical sweat.

By contrast, the priests who ministered to the Lord in the temple were strictly forbidden to clothe themselves with “anything that causes sweat” (Ezekiel 44:18). Priests ministering before God were not to sweat. There was one time, however, when even God had to sweat.

In a different garden called Gethsemane, Jesus prayed so intensely that “his sweat became like great drops of blood falling to the ground.” He prayed: “Father, if it is your will, take this cup away from me; nevertheless not my will, but yours be done.”

Even though Jesus recoiled at the thought of bearing our judgment as he took our sins on himself in his crucifixion, he obeyed God. His death and resurrection reversed the curse of death for all who depend on him alone as their only hope for everlasting life.

Point to ponder: God wants to cover you with his righteousness.

Scripture to remember: “For he [God the Father] made him [God the Son] who knew no sin to be sin for us, that we might become the righteousness of God in him” (II Corinthians 5:21).

Question to consider: What kind of spiritual clothes are you wearing?

Previous: You, not technology, can solve city waste woes
Next: Central bankers admit they failed to fix the economy

Black History Celebration at Our Lady of Lourdes