Why did John The Baptist call Jesus the Lamb of God?

Posted by: Bulletin Editor March 28, 2014 Comments Off on Why did John The Baptist call Jesus the Lamb of God?

“John the Baptist called Jesus the Lamb of God because Jesus is too holy and wonderful for him to even untie his shoes,” says Mitchell, 8.

Before John the Baptist proclaimed Jesus as the Lamb of God, he talked about his sandals. By saying he was not worthy to untie Jesus’ sandals, John put himself in the position of the lowest slave. Anything to do with feet was usually reserved for the lowest slave in a household. That’s why Jesus shocked his disciples when he cleaned their feet before they ate the Passover meal on the night before his crucifixion. 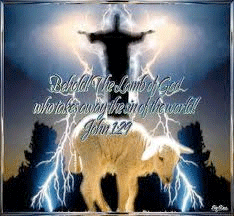 Agnus Dei, qui tollis peccata mundi, dona nobis pacem. Lamb of God who takes away the sins of the world, grant us peace.

Jesus wasn’t joking when he said the way up in his kingdom is the way down. After his disciples debated among themselves about who would be the greatest in God’s kingdom, Jesus said, “If anyone desires to be first, he shall be last of all and servant of all” (Mark 9:35).

God’s ways are usually contrary to the way we’re trained to think. Leaders usually come from prominent families and go to the best schools. Who would think that the Messiah would be born into a poor family supported by a father who did manual labor in a backwater place like Nazareth? The whole scenario is so contrary to the way we think about power.

“In Bible times when a person sinned, they would take a lamb to the temple to sacrifice,” says Sandra, 9. “To be called a Lamb of God means that God gave Jesus to be killed like a lamb for our sins so we could live forever.”

The majority of Old Testament passages that mention “lamb” refer to a sacrifice (85 out of 96). As a nation, Israel began its history by putting lamb’s blood on the doorposts and lintels of each house. The death angel took the lives of all Egypt’s firstborn, but passed over the houses that had lamb’s blood on the door. To this day, Jews all over the world celebrate the Passover. 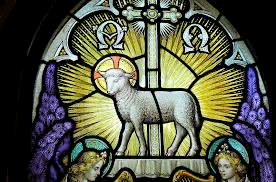 The entire Old Testament can be summed up with one question, “Where is the lamb?” A pivotal point in Jewish history came when father Abraham took Isaac up the mountain to offer a sacrifice. Abraham knew God had promised to make him the father of many nations, yet God had commanded him to sacrifice his only son by Sarah. When Isaac asked about the lamb, Abraham assured him that God would provide the lamb (Genesis 22:6-8).

The priests in the temple at Jerusalem sacrificed a lamb in the morning and evening every day (Exodus 29:38). For hundreds of years, Jews brought lambs to the temple as sacrifices for their sins. They kept coming back year after year because no lamb could take away all their sin.

For Christians, the Passover points to a greater reality. In the person of the Lord Jesus Christ, God brought the perfect sacrifice that John proclaimed: “Behold! The Lamb of God, who takes away the sin of the world!” (John 1:29).

Think about this: All the sacrificial lambs offered in the Old Testament point to Jesus Christ. Memorize this truth: John 1:29 quoted above. Ask this question: Have you beheld and believed in the Lamb of God as the one who took away your sin?

Previous: Whisper jets 2-to-4 times quieter for Island than usual jets
Next: The ten best apps for yoga, suitable for kids