What’s the lesson of Jonah and the big fish?

Posted by: Bulletin Editor September 1, 2017 Comments Off on What’s the lesson of Jonah and the big fish?

We all think we’re experts at hiding from God. Our stories may not be as dramatic as Jonah’s, but they’re just as real. God always wins at hide and seek.

“You cannot run from God even in the belly of a fish!” says Aaron, 11. “It’s like God has see-through glasses. He’s got heat-seeking eyes or life-seeking sensors.”

In this case, God’s life-seeking sensors detected something in Nineveh, the capital of Assyria. God told 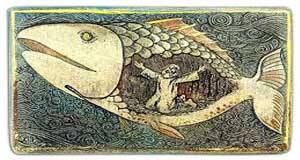 Jonah and the whale (or big fish).

Jonah to deliver his message to the Assyrians, but Jonah bought a one-way ticket for a cruise in the opposite direction. God changed Jonah’s travel plans by making him the world’s first submariner.

“Jonah was in the fish for three days and three nights,” says Madison, 10. “He prayed day and night that he could get out of the fish’s slimy, smelly stomach.”

God has ways of stopping us in our tracks when we’re running from him. Jonah’s prayer is desperate: “When my soul fainted within me, I remembered the Lord” (Jonah 2:7).

Why wait until you’ve exhausted your resources before turning to God? He will hear you from the depths of despair, but he’ll also hear you before you buy a wrong-way ticket.

“Once when I was 4 years old, I tried to steal some candy from a store,” says Patrick, 10. “I tried to hide it from God, but he let my mom know that I had done it. My mom told me to put it back, and I was grounded for three hours that day.”

Whether it’s three hours in your room or three days in the belly of a fish, the lesson is the same, says Patrick: “You shouldn’t never run away from God.”

Today, we have more sophisticated ways to run. No need to buy a ticket on an ocean liner. Select your escape from several television channels, computer games or websites. Keep the noise level high at all times. A prolonged quiet period is too dangerous. Your conscience might intrude.

“I think God gets really sad when we run from him just like we do when we want to play with our friends, and they leave us out,” says Kelsey, 9.

There’s a tendency to think of God as an impersonal being incapable of being hurt. God is a passionate, jealous lover, and he pursues us when we run from him.

In the end, Jonah did obey God, says Langdon, 11: “Jonah did go to Nineveh, and he told people about God. The people in that city were saved, but then Jonah got angry and went east of the city.”

Jonah wanted to see God zap the Assyrians. They were some of the cruelest, most wicked people in recorded history. We shouldn’t be too hard on Jonah for wanting a ringside seat. Like Jonah, perhaps our view of God’s grace and mercy could use some adjustment. We may condemn sins in others while ignoring, denying or excusing our own.

The people of Nineveh believed God when they heard Jonah’s message. God withheld his judgment after Nineveh’s king issued a nationwide decree to fast and turn away from evil.

In the end, Jonah learned a lesson we all need to learn: “Even if you really don’t want to go or do what God tells you, just trust him to make things right,” says Laura, 11.

Think about this: When you run from God, he will always find you.

Memorize this truth: “Where can I go from Your Spirit? Or where can I flee from your presence?” (Psalm 139:7).

Ask this question: Are you running from something you know God wants you to do?

Tagged with: belly of a whale fish Jonah Jonah and the fish Kinsolving whale

Previous: Queen St. at Coxwell to be closed most of September
Next: Heritage Toronto September events