Queen St. at Coxwell to be closed most of September

Posted by: Bulletin Editor September 1, 2017 Comments Off on Queen St. at Coxwell to be closed most of September

The intersection of Queen Street East and Coxwell Avenue in Toronto will be closed in all directions from the morning of September 4 to the evening of September 29 to allow for streetcar-track replacement, road and sidewalk repairs and water-distribution improvements. This work will reduce the risk of watermain breaks.
On Monday, September 4 beginning at 5 a.m., the intersection will be fully closed, with all eastbound 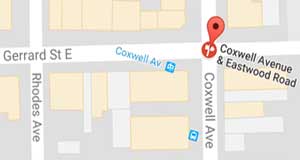 traffic on Queen Street detoured at Greenwood Avenue and all westbound traffic detoured at Kingston Road. Southbound traffic on Coxwell Avenue will be detoured at Dundas Street East and northbound traffic will be detoured at Eastern Avenue. Only local traffic will be allowed beyond these general restrictions, where permitted.
Enhanced signage will inform drivers of the road closures and signal-timing changes on parallel roads will help manage traffic in the area. Road users should expect to encounter some delays and increased traffic on nearby roads.
Work on the project will take place seven days a week from 7 a.m. to midnight and some of the work will occur on a 24/7 basis to complete the project faster. The first few days of work will be the most disruptive as they involve breaking and removing concrete in the streetcar-track areas. The work to break up the concrete will stop at 11 p.m.
A number of changes will be made to TTC surface-transit service as a result of this work:
501/301 Queen route:
• Buses will operate on Queen Street between Neville Park Loop and the Queen/River Streets area (diverting both ways around the closed intersection via Eastern Avenue and Woodward Avenue).
• Streetcars will operate on Queen Street between Connaught Avenue and Roncesvalles Avenue.
• Queen service in the west end of the route will continue to operate with buses between Roncesvalles and Long Branch Loop due to other track work.
502 Downtowner and 503 Kingston routes:
• Buses will replace streetcars and will divert around the closed intersection both ways via Eastern Avenue and Woodward Avenue.
Bus routes:
• The 22A, 22B and 322 Coxwell routes that operate from Coxwell Station will be diverted a short distance via Dundas Street.
Up-to-date transit diversion details are available from the TTC at http://www.ttc.ca.
The City’s web-based map to help residents and visitors make their travel plans is available at http://www.toronto.ca/roadrestrictions. Information about the City’s planned capital construction work is available at http://www.toronto.ca/inview.

2017-09-01
Bulletin Editor
Previous: Has the Texas disaster taught us a lesson?
Next: What’s the lesson of Jonah and the big fish?