Posted by: Bulletin News January 3, 2017 Comments Off on Viewpoint: A watery new museum for lakefront Toronto? 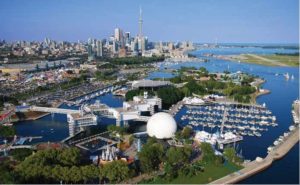 Ontario Place is one of several locations along Toronto’s waterfront for a World Water Museum.

Museums are again in the wind in Toronto.

There has long been a need for a Museum of Toronto to locate large collections about the city’s history. That would attract mostly Torontonians.

An even better variant on that would be an “urban museum,” one that gives visitors from everywhere a sense of many actual and possible cities, from the past and into the future, a part of which would be dedicated to Toronto alone. Toronto, after all, is one of the most efficient examples of large and rapid urbanization in the world. That is our strength.

Perhaps the best place for that kind of museum is the Old City Hall. People are already working on that.

In the meantime, for the past few years I’ve been pitching another good idea for a new museum in Toronto. So far no take-up. It would be a World Water Museum.

Water—the human need for it and its uses, symbolic and real—is one of the key basics and drivers of the environmental revolution. Along with the air we breathe, water is our most basic need. It is a universal theme – all people, places and cultures have an essential interest in water. Water resources are in danger everywhere.

Why here in Toronto?

First, like an urban museum, it showcases a local strength, one that makes us even more unique: Ontario and Toronto are at the centre of the world’s largest fresh water supply. Second, we have several sites along our waterfront for such a feature – one already built and looking for new uses – Ontario Place (see photo)! Third, Toronto has all the resources and water related interests and groups to develop such a new museum. Indeed it builds on the idea of “soft power” in modern museology championed right here out of Toronto by the world’s largest museum related consultant, Lord Cultural Resources.

What would be the essential features of a WWM? Here’s a list that would together make for a premier attraction. I envisage such a museum in basically three halls, plus administrative space.

Those interested in participating in an initial working committee to develop such a World Water Museum concept can contact me at daletaylor@rogers.com. Let’s get started.