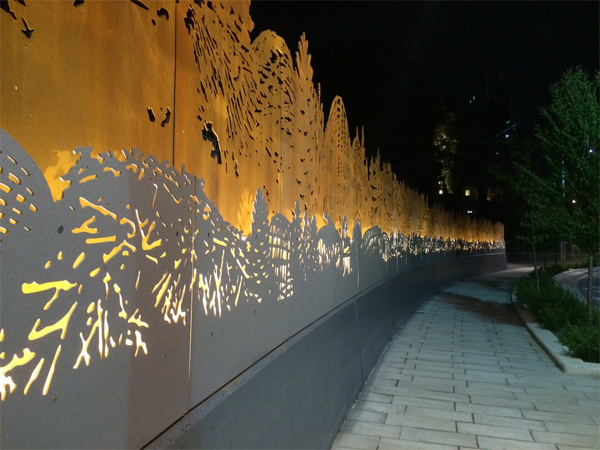 When Waterfront Toronto was looking for locations for art installations in the West Donlands they settled on the corner of Eastern Avenue at Sumach.

Why? Because it is the site of the home of Lucie and Thornton Blackburn. The Blackburns arrived in Canada via the Underground Railroad.

Lucie and Thornton were not satisfied to merely thrive when they got here, they looked back and offered their hand to many other ex-slaves so that they also could be freemen in Canada arriving on that phantom train.

The art installation, a spectacular fence between Sumach Street and Inglenook Secondary School, was installed in June of 2015  and is the conjuring of the beautiful minds of Scott Eunson, a Toronto artist and his collaborator Marianne Lovink of Philadelphia.

It is the only physical recognition of the Blackburns.

It is not a “museological* work,” rather it’s an interpretation, says Rebecca Carbin, Public Arts Program Manager of Waterfront Toronto.

The wall is made of corten steel and stainless steel with a row of led lights behind and below to create a look of fire at night. It depicts a deep history of the inhabitation of that area from ice age to present with an expanded moment of human history devoted to the Blackburns. Corten is a weathering steel. It’s is a corrosion-resistant steel, that left uncoated develops an outer layer patina. This patina protects the steel from additional corrosion.

If you look closely you can see renditions of homemaking articles of Mrs. Blackburn. Some of her silver spoons and lace doilies were found at an archeological dig on the site. One can also see snowshoes, corn and the smallpox virus—interpretive of course—in the work.

There is also a collaborative element as the artists worked with some of the students at Inglenook Secondary for parts of the work.

Inglenook Secondary is interesting historically too. If you look above one door, engraved in stone, is the word “Girls.”

What a corner! Old and new.

Previous: Guess who is behind the ISIL Caliphate Project?
Next: Cabbagetown can teach Ottawa how to preserve 24 Sussex