Social media use for news is falling worldwide

Posted by: Bulletin Editor June 14, 2018 Comments Off on Social media use for news is falling worldwide

After years of growth, the use of social media for news is falling across the world

But messaging apps are picking up the slack, the Reuters Institute for the Study of Journalism finds in its 2018 Digital News Report.
By LAURA HAZARD OWEN @laurahazardowen June 13, 2018, 7:01 p.m.

People are becoming disenchanted with Facebook for news. The “Trump bump” appears to be sustaining itself. And younger people are more likely to donate money to a news organization than older people.

These are some of the findings from a big new report out Thursday from Oxford’s Reuters Institute for the Study of Journalism. The Reuters Institute’s Digital News Report for 2018 surveyed more than 74,000 people in 37 countries about their digital news consumption. (Included in the report for the first time this year: Bulgaria

RELATED ARTICLE
In the U.S., the left trusts the mainstream media more than the right, and the gap is growing

The research is based on online YouGov surveys earlier this year, followed by face-to-face focus groups in the U.S., U.K., German, and Brazil on the topics of social media and messaging apps. The report includes a number of findings on fake news, misinformation, and trust in the media; for more on those topics, see this piece by the report’s authors, and I’ll also include some more info in Friday’s fake news column.Here are some of the most interesting findings from the report:

The use of social media (read: Facebook) for news is declining.

“For the last seven years we have tracked the key sources for news across major countries and have reported a picture of relentless growth in the use of social media for news,” the researchers write. “Now, in many countries, growth has stopped or gone into reverse.” This is almost entirely due to changes in Facebook habits. In the U.S., for instance, 39 percent of people said they used Facebook as a source of news in 2018, down 9 percentage points from 2017. And if you look just at young people in the U.S., their use of Facebook for news is down by 20 percent compared to 2017. This isn’t true in all countries — “Facebook news usage is up significantly in Malaysia and the Czech Republic — but it’s true in most of the ones Reuters looked at. This continues a trend that began last year in countries outside the U.S. 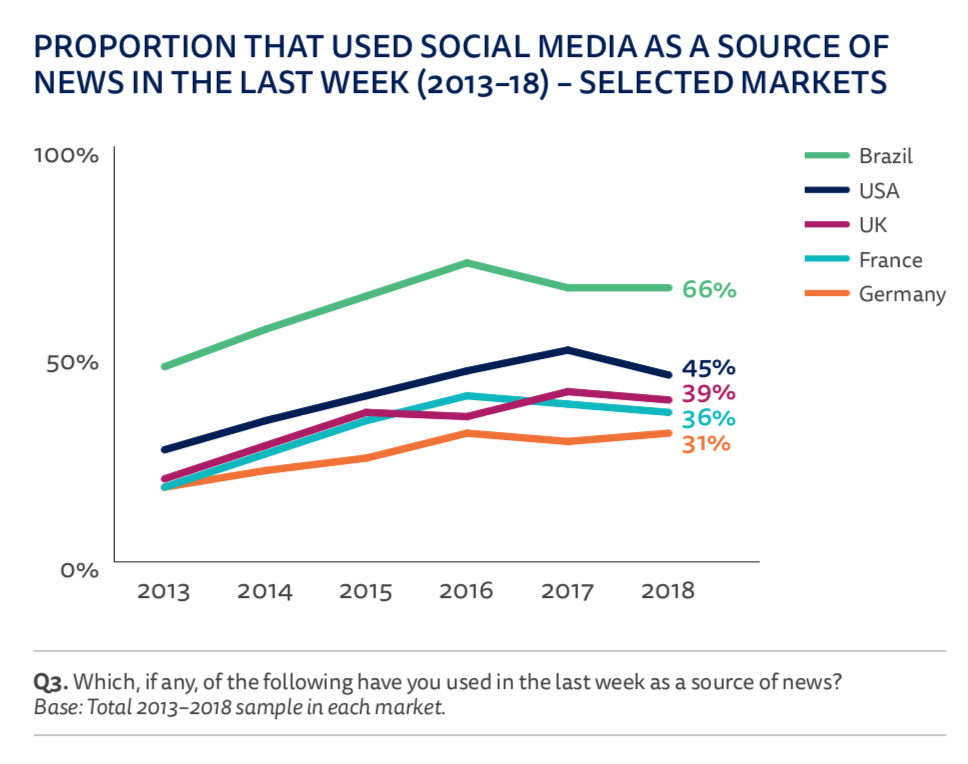 Reuters ran most of its research before Facebook’s algorithm changes in January 2018. If this can’t be blamed on a decision by Facebook, then what does account for it? The researchers suggest that people feel more comfortable moving their discussions to closed messaging apps like WhatsApp(whose use for news across countries has almost tripled since 2014 — though, in the U.S., only four percent of respondents said they get news from it).The people that Reuters spoke with said that they do still find stories on Facebook and Twitter, “but then they will often post them to a WhatsApp group for discussion, often using a screen grab or a headline without a link.”

“The source is still Facebook because when we’re going to share something on WhatsApp, usually the article we’ve found is on Facebook,” a U.S. man in the 20- to 29-year-old age group told the focus group. “So Facebook is still king in that sense.”

A U.S. woman in the 20- to 29-year-old age group said, “Somehow WhatsApp feels a lot more private. Like it’s kind of a hybrid between texting and social media. Whereas in Facebook, for some reason it just feels like it’s public. Even if you’re in Messenger.” 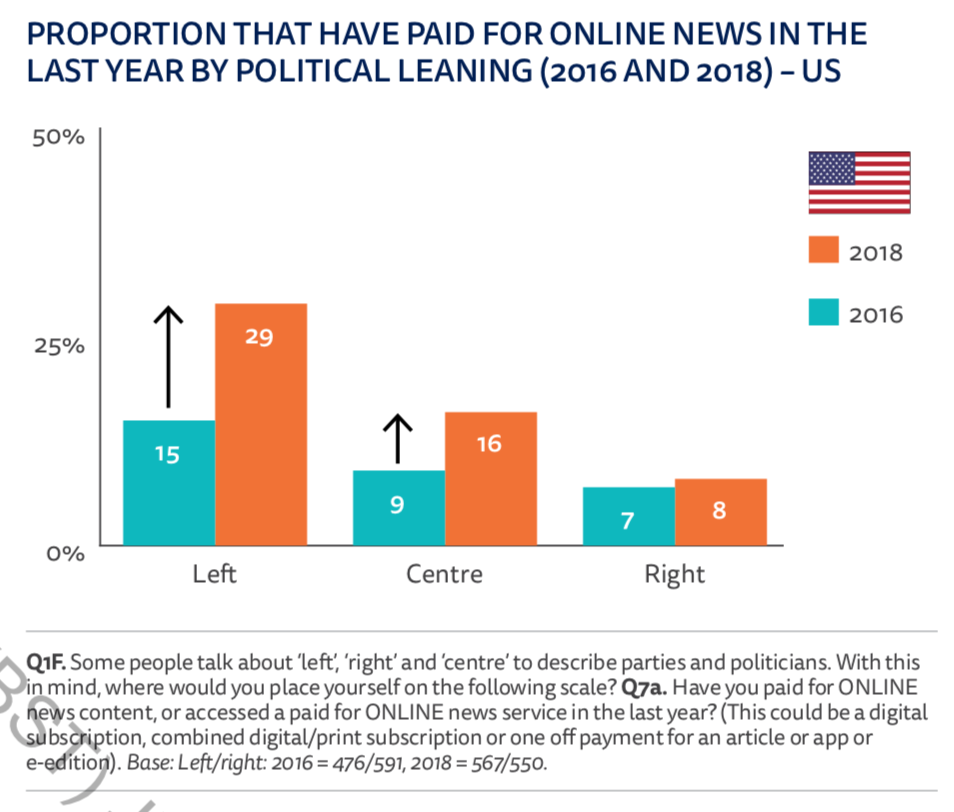 This trend could be a tricky one for publishers:

If these trends towards messaging apps are strengthened, it could create new dilemmas for publishers around being able to engage with ordinary citizens. The shift to messaging apps is partly driven by a desire for greater privacy, so pushing news into these spaces needs to be more organic and more conversational if it is to be accepted. In any case, setting up broadcast lists in WhatsApp is a complex and labor-intensive process (publishers have to provide a phone number which users then subscribe to)…

[If] more immediate and intelligent discussion moves to messaging apps, this could make Facebook and Twitter comments even less representative of general users than they already are.

Most people don’t go straight to a publisher’s homepage or app for news. Sixty-five percent of respondents said they prefer to access news in other ways, like search and social media. This differs a lot by country, however: “Nordic publishers still have direct relationships with their readers…Korean and Japanese publishers, on the other hand, find themselves much more dependent on third-party platforms to access audiences.” 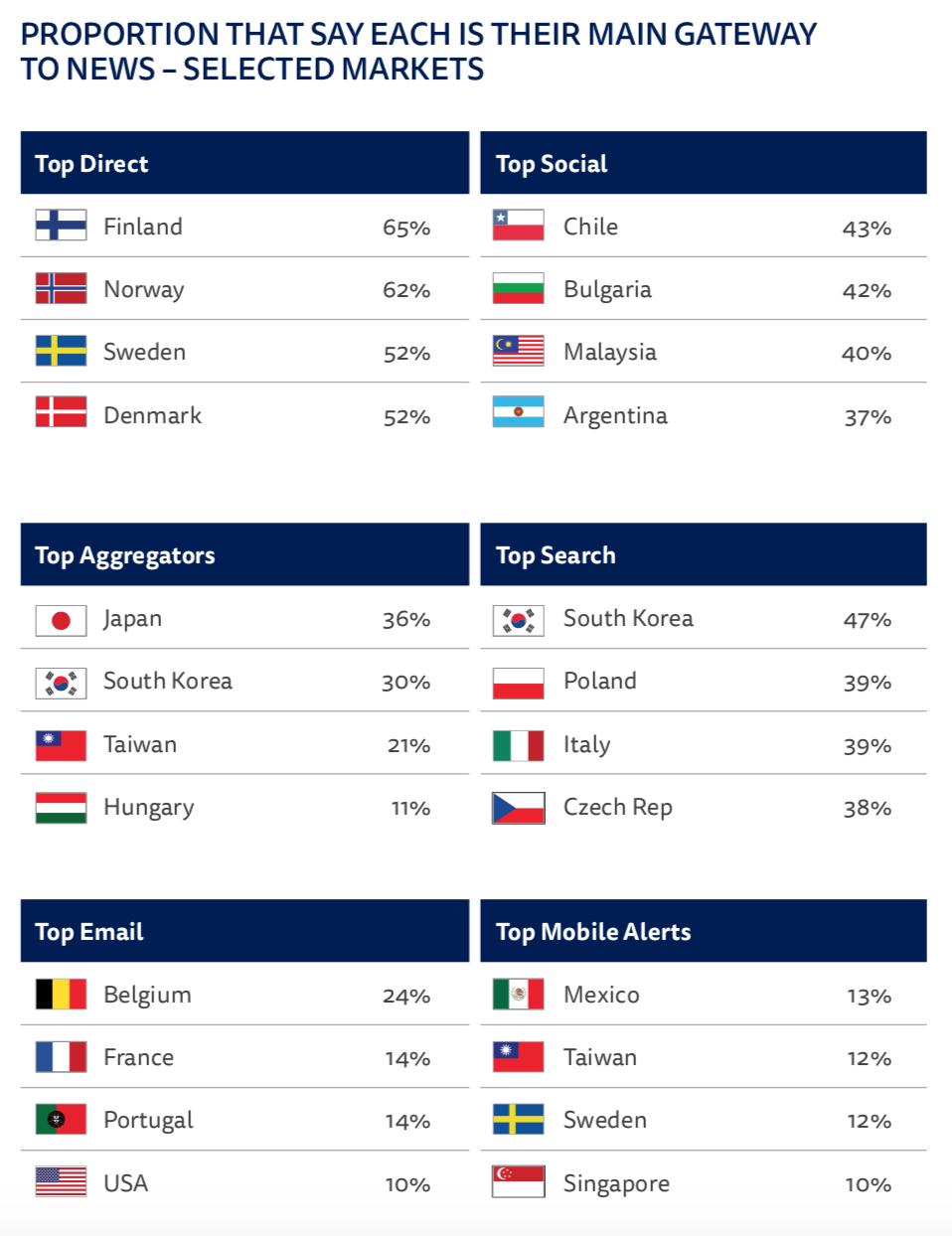 Sixteen percent of respondents in the U.S. pay for some kind of online news — with almost all of the growth coming from left-leaning people and people under 35. 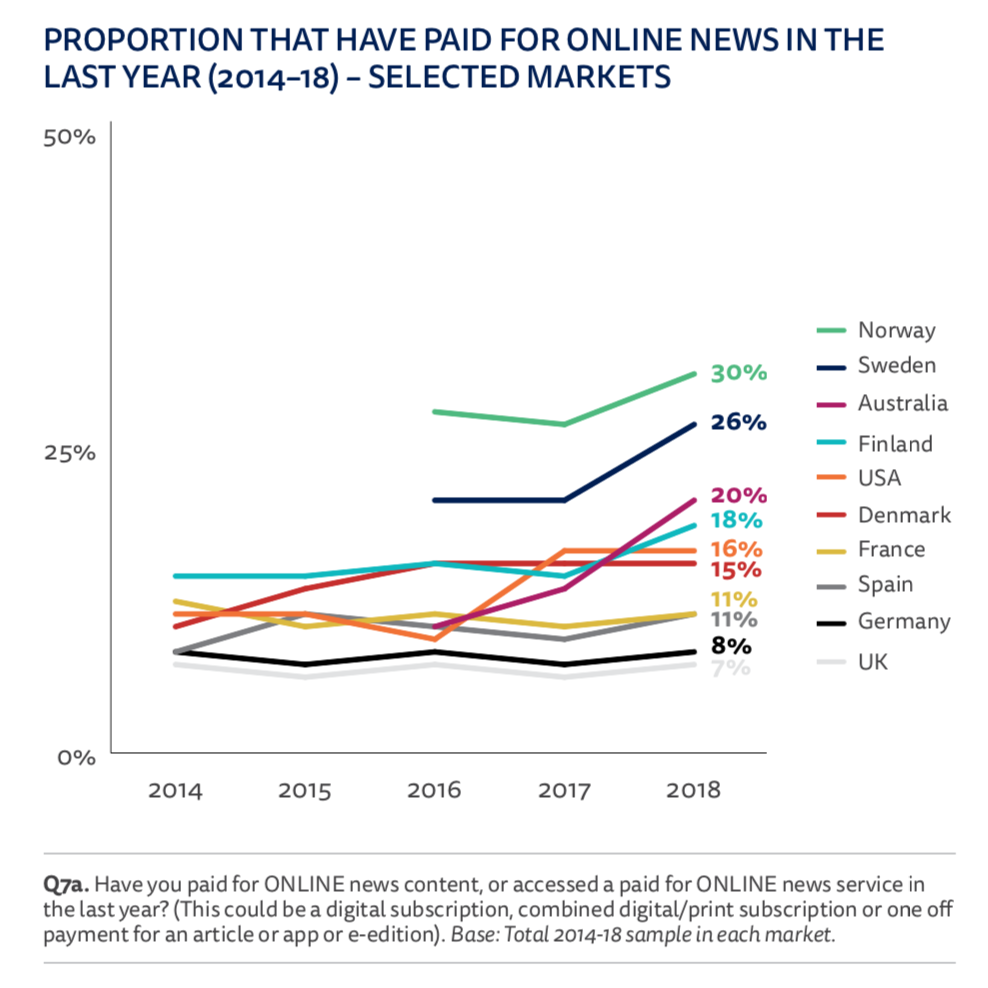 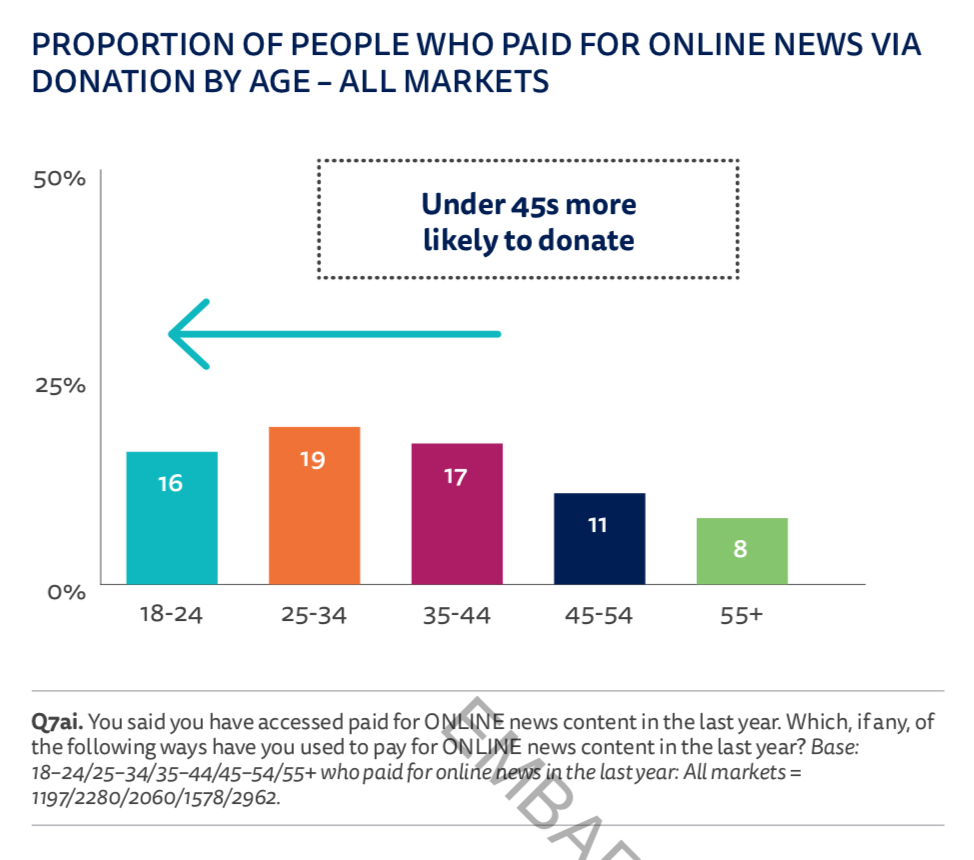 Donations (i.e., one-off payments, not subscriptions) are also showing potential: While just three percent of U.S. respondents said they made a donation to a news organization in the last year, 26 percent said they’d consider it in the future. One thing that might induce people to donate more would simply be knowing about the trouble the news industry is facing:

One of our new questions this year reveals that more than two-thirds of respondents (68 percent) are either unaware of the problems of the news industry or believe that most news organizations are making a profit from digital news. In reality, most sites are operating at a loss, subsidized by investors, alternative revenue streams, or historic profits from broadcast or print.

Those that were aware that digital newspapers are making a loss (10 percent of our sample) are more likely to pay for a news subscription or give a donation.

As for why young people are more likely to pay for news, Reuters speculates:

Donations may help bridge the gap between paying nothing and an expensive subscription, but they also work better for a generation that likes to access multiple sources on multiple devices. For both these reasons we can expect pay-as-you-go models like donations and crowdfunding to be an increasingly important part of the picture.

“Our survey shows a sizeable drop in the share of Americans who report using news outlets on a weekly basis,” the researchers write. “Notably, the same pattern appears online and off: local broadcasters, local TV news, and the major broadcast networks are all down several percentage points from last year, as are major online news aggregators like Yahoo News and HuffPost. Other digital-born media were also not immune, with BuzzFeed and Vice seeing revenue losses.”

The full report, which includes a ton of country-specific data, is here.