Porter Air skips Island, flies in & out of Pearson

Posted by: Bulletin Editor November 8, 2006 Comments Off on Porter Air skips Island, flies in & out of Pearson

U.S. ambassador among passengers who had to cross on old ferry to Island, get frisked, then take a bus to a flight at Pearson on Porter Air plane 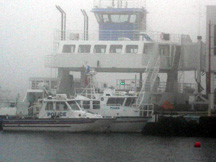 Two Toronto police harbour patrol boats have brought divers and equipment to help Island airport’s new ferry dislodge a log from its propeller. The orange ball to the right is a float identifying a police diver.

The few passengers taking scheduled flights from Ottawa to the Island Airport and Porter Airlines’ new ferry had a quite an unexpected rough ride on a foggy Nov. 8. They were flying in and out of Pearson Airport. It’s reported that the U.S. ambassador, David Wilkins, was also among the hapless crowd flying the new airline that has a raccoon as its mascot. He got slightly better treatment than most.

The multimillion-dollar ferry has been having regular problems finding its way into the new $5 million dollar upgraded docking facilities, often hitting the seawall and occasionally been blown or drifted off course. But for a number of hours the ferry was out of service when a log got caught in one of its propellers.

The police harbour unit sent divers—perhaps at city taxpayers’ expense—to attempt to dislodge the log. That meant passengers hoping to take off at fog-bound Island airport were riding the old Maple City ferry across the gap to be frisked in the preflight procedure before being bused off to Pearson Airport. 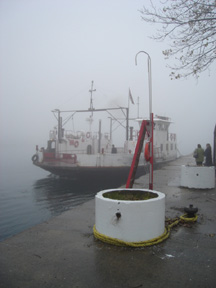 The old Maple City ferry is back in service. The few passengers flying Porter Air were ferried to the airport, frisked in pre-flight rituals, then ferried back to a chartered bus to Pearson Airport.

Their quickly chartered bus was reportedly escorted through highway traffic by an RCMP car because the of the American official on board the bus. Once at Pearson, the handful of Porter passengers walked across the tarmac and boarded their Porter plane.