Posted by: Bulletin Editor November 8, 2006 Comments Off on Tree a memorial to local youth leader 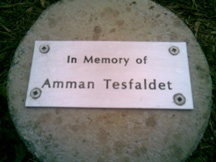 A memorial tree has been planted in Crombie Park by the St. Lawrence Community Recreation Centre to honour the memory of Amman Tesfaldet, whose accidental death in April of 2005 at age 20 saddened the entire community.

Amman was the oldest of four brothers and a resident with them of Woodsworth Co-op, along with his mother Simret and father Bereket. They were bereft at the loss of their popular brother and son and are grateful for the support they have received from the community in St. Lawrence Neighbourhood.

Amman was very involved with the youth at the community centre and many looked up to him.

Tree in Crombie Park across from Market Lane School is Rec Centre’s memorial to Amman Tesfaldet.

A fund has been started in his name to help youths in need at the centre.

In July several children went away on a week’s vacation courtesy of the monies that were collected at Amman’s memorial service. The tree was planted in October.