Pierre Lemieux, candidate for leadership of the Conservative Party of Canada, released details of his plan to strengthen free speech in Canada. This announcement comes after a 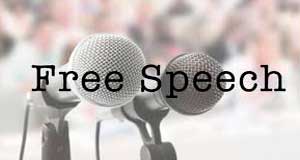 productive meeting with University of Toronto Professor Jordan Peterson, a vocal critic of the growing prohibitions on free speech including frustration at the mandated use of manufactured gender-specific pronouns: there are over 40 such as “ze” and “xer” and the list is ever growing.

“Freedom of speech in Canada is under attack,” said Lemieux, shortly after the meeting concluded. “Protection from discrimination is entirely different from not wanting to be offended. Chronic political correctness is strangling free and respectful debate in Canada and it has to stop.”

Lemieux proposes the creation of a legislative committee of Parliament which would invite Dr. Peterson and others to provide insight in a review of all laws governing speech to ensure that they properly balance freedom of speech and reasonable limits with a particular focus on limiting government enforcement of political correctness.

He would also move to immediately repeal Bill C-16 should it be passed by the Liberal government, which seeks to entrench gender identity and expression in the same laws that govern hate speech.

“There is a big difference between free speech and forced speech,” stated Dr. Peterson, who indicated support for Lemieux’s proposals. “It is wrong to jail someone for holding different attitudes or beliefs, or for simply refusing to use specific words on demand in a free society. The last thing we need are more laws forcing Canadians to use specific, made-up words ‘on demand’ or face penalties.”

In a Toronto Sun article published in November, Chief Commissioner of the Ontario Human Rights Commission, Renu Mandhane, outlined such prohibitions in the province when asked what constituted a pronoun usage offence: “Refusing to address a trans person by their chosen name and a personal pronoun that matches their gender identity, or purposely misgendering, is discrimination when it takes place in a social area covered by the Code (employment, housing, and services like education)…A tribunal or court may order financial or other remedies.”

This latest announcement builds on Lemieux’s campaign commitments to ensure open and respectful debate on all topics, including those that are traditionally seen as off-limits. “My proposals today are designed to free our speech,” continued Lemieux. “Enough is enough – Canada is already a safe space.”