Posted by: Bulletin Editor April 2, 2015 Comments Off on Pan Am Games planners take input from GWNA

Officials with the 2015 Pan Am/Parapan Am Games were kept busy with questions and suggestions about traffic and parking when they spoke at the Gooderham & Worts Neighbourthood Association’s Annual General Meeting in March.

Taxis will be moved from Trinity Street, police will direct traffic at three major Distillery intersections, Cherry St. will be closed, local bus service will be stepped up and trucks servicing Athletes Village will have an intermittent schedule so they don’t bunch up.

Doug Spooner, TO2015 senior manager of Transportation Partner Integration and Planning, thanked the GWNA for its work with Pan Am organizers.

“This is one of the most well-represented neighbourhoods that we work with,” he said. He drew laughter when he referred to the traffic mess that accompanies the Christmas Market.

GWNA members, he said, “basically gave me the mandate to not run the Christmas Market transportation plan.”

The Distillery District is right across the street from Athletes Village where 10,000 athletes, coaches and team officials from 41 countries in the Americas will live during the July and August games.

Cherry St. will be closed, possibly until Sept. 30, to pack up after the games have shut down. The games run July 10-26 and Aug. 7-15. Spooner called Sept. 30 “the worst case scenario. We’re trying to get out of there as fast as we can.”

TTC’s No. 172 bus will run more frequently during the games. “There’s a bus every 10 minutes…It’s going to connect from the Distillery to Union Station and to Nathan Phillips Square and back,” said Spooner.

A security fence with scrim (a see-through fabric), a concrete base and motion detectors will isolate the village. The fence has to be installed by June 15 to allow the integrated security unit to sweep, said Spooner.

A man in the audience said that in the Distillery it wouldn’t be unusual for “heroes who’ve had a few too many” to jump on the fence in the wee hours. He worried that could set off sirens as people sleep. Spooner said police on patrol will respond. “It’s not a big siren that goes off,” he said.

Another resident wondered how crews would respond to a possible emergency on Cherry St. with the security fence up. “Toronto Fire sits on the working group for the village and they are comfortable” with the fencing, said Spooner.

Taxis will be moved from Trinity St. to a loading zone on the north side of Mill St. west of Trinity. An audience member suggested getting rid of parking space on Mill St. “You can get four lanes going through there,” he said.

A woman suggested district residents be given signs for their dashboards so police will be lenient as they drive about. “There’s not a (police) checkpoint that anyone would come thorough that anybody would look for a pass,” said Spooner’s TO 2015 colleague Aaron Williams, senior manager External Partnerships.

Service trucks will run along Lakeshore, up Parliament and along Eastern, Spooner said. They’re being scheduled so only one runs every half hour so they don’t queue up.

Spooner’s overall advice was to take public transit to and from the Distillery during the games. “We’re enhancing (it). We’re making sure (it works) for this region,” he said.

Member Julie Beddoes had advice for Spooner. “Could you please work with the TTC to give the (No. 172) bus a lot of publicity. It’s really frustrating when there’s an event in the Distillery to see the bus go by empty and people cruising around looking for parking.” 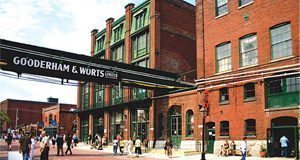