Our history turned on a snowy Christmas eve walk

Posted by: Bulletin News October 2, 2014 Comments Off on Our history turned on a snowy Christmas eve walk

One of my favourite Christmas stories of days past is the one about George William Allan, the son of one of the wealthiest families in Ontario, who decided it was time to do something to help the children who lived on the mean streets of Toronto.

As legend has it on Christmas Eve 1870 George went for a walk along Front Street from his home on the northeast corner of Front and Frederick heading toward St. Lawrence Market.

It was along the way where he encountered children huddled in doorways trying to escape the cold. On that Christmas Eve George, after living a life of privilege, was determined to do something to help the homeless youth of Toronto whose numbers were growing.

That night George decided to donate his townhouse on Frederick Street to become the Newsboys’ Home, where young boys were given newspapers to sell on the streets and at night have a place to eat and sleep—then a radical idea.

Many rich and wealthy people in 19th-century Toronto and the rest of the British Empire didn’t think that the lower classes and especially children should be educated or even looked after by government as they might grow up and take over society, leaving the privileged classes throneless.

Within a year his Newsboys’ Home had become a place of refuge for up to 20 orphaned boys, most of whom had never known a hot meal or warm bed.

Not nearly enough room for all the homeless children of Toronto, but it was a start. 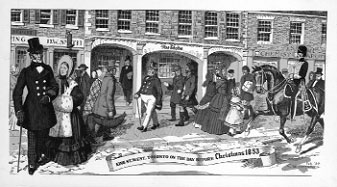 In a mere 50 years Toronto had grown from a quaint agricultural town of 10 000 people to a vast polluting industrial city of a quarter million. It was a time of immense growth and even greater despair, encapsulated so well in Charles Dickens 19th century classic A Christmas Carol.

The great English writer visited Toronto in May 1842, stayed at the former American Hotel at Front and Yonge and wrote the following about his visit, “The streets are well paved, and lighted with gas; the houses are large and good; the shops excellent. There is a good stone prison here; and there are, besides, a handsome church, a court-house, public offices, many spacious private residences.”

A year after his Toronto visit Dickens published A Christmas Carol where mean ol’ Ebenezer Scrooge is visited by three ghosts on Christmas Eve, showing Scrooge how his life will play out if he does not reform. Dickens wrote A Christmas Carol just as the Industrial Revolution was sweeping across the world rearranging the social landscape.

Children then were looked upon like animals are today; some we love and some we eat. However, George Allan felt differently and in doing so led the way as another remarkable man to leave his mark on Toronto’s history.

In 1874 a 10-year-old boy named John Joseph Kelso arrived in Toronto with his family poor and starving, escaping the unimaginable poverty back in Ireland.

The following year John Joseph, JJ, as he became known, skipped school at age 11and got a job at James Bain’s bookstore on King Street East, just around the corner from the Newsboys’ Home.

As JJ grew older he was often sickened at the sight of young shoeless boys not fortunate to live at the Newsboys’ Home and forced, as he would famously say, to “demean themselves and give the money to their parents or unscrupulous elders to buy liquor.”

As time went on JJ Kelso went to college, became a bright student and eventually got himself a job as a newspaper reporter at the Globe. Through his writings he lifted the lid of the gruesome world of Toronto street children.

Kelso, once a poor destitute street child, would then go on to found the Children’s Aid Society of Toronto in 1891, giving hope at last to the most vulnerable amongst us.

But it didn’t end there; previously Kelso established the Toronto Humane Society in 1887 and the Fresh Air Fund in 1888, providing excursions to Toronto Island for poor women and children. In 1911 Kelso become one of the founders of the still-thriving Central Neighbourhood House, built to bridge the gap between rich and poor by having workers live communally in urban slums with those they wanted to help.

After his death in 1901 and as a tribute to the memory of George William Allan, who was also the mayor of Toronto in 1855, the city changed the name of the Horticultural Gardens to Allan Gardens, which it is to this day.

JJ Kelso, after a life dedicated to helping the poor and destitute of Toronto, died on Sept. 30, 1935.

George Allan was no Ebenezer Scrooge and it’s not known if he ever met Dickens when the great writer was in Toronto, but as an avid reader no doubt he would have read

A Christmas Carol, maybe giving him some inspiration to help the less fortunate around him. That in turn would lead the way for men like JJ Kelso to change the world.

To think it all began with a walk along Front Street on a snowy Christmas Eve in 1870. And so, as Tiny Tim observed, God Bless Us, Every One!

Previous: Working smoke alarms save lives: Test yours monthly
Next: How Danny Murphy’s dog Tank ended up in our house