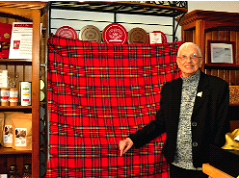 Mary Macleod with a tartan from the school she attended in Scotland.

A vacation over 30 years ago got Mary Macleod sweet on the idea of making and selling her own cookies—shortbread, that is. Today, her shop is on Queen St. E. in Riverside.

In the late 1970s she and her eldest son ventured to France for a holiday. “We looked at little petite sweets. They had lovely biscuits similar to shortbread but more sugary,” says Macleod, sitting in her little shop where a bell clangs when customers enter.

“When I came back (to Canada) I decided it would be nice to make shortbread because in Canada they don’t have a good shortbread.”

She opened her first store in 1981 in mid-town Toronto. Customers still come from there to her Riverside shop at Christmas time knowing the trip is worth it to get Macleod’s hand-made, all-butter shortbreads. Riverside is her sixth location. She’s been here since 1997.

She laughs as she recalls how tiny her first shop was in mid-town. It was under the marquis of the Capitol movie theatre on Yonge north of Eglinton. It had just enough space to turn around because the counter was only a few feet from her work table.

“I had no walking to do. I’d just turn around and meet the people. Everyone loved it. If there was anyone else in the store besides me it was overcrowded.”

Born just outside Glasgow, Macleod came to Canada in 1955. A young East Indian school friend twigged her to the idea. Her friend had a sister in Canada who spoke highly of the country.

She remembers coming up the St. Lawrence River on the RMS Saxonia in November. The water was so calm “it was just like glass.” Others on the vessel were young like herself “and ready to take on Canada. It was a great atmosphere on the boat,” says Macleod.

Her signature cookie, with chocolate chunks, took 18 long months to get the recipe just right. She’d be up ‘til two or three in the morning working on it in her mid-town store. Dough was everywhere. “It was a big mess.”

Police on night patrol would tap on her shop window to see if everything was okay. “They’d make hand signs through the glass to ask if I wanted a tea or coffee,” Macleod says.

She found her Riverside location with help from a real estate agent. “The minute I came into this place I said this is it. I just had a wonderful feeling.” It looks small, but the entire property is big enough that at one time it housed a roller skating rink.

Through the years Macleod’s kept a ‘babybook” with photos of customers’ children. When they come into the store and it’s their birthday they get a free shortbread.

Sharon Grewal-Macleod, her daughter-in-law, runs the place now and Macleod enjoys spending her time baking and doing product development. “It’s my own recipe and formula. That’s the key to it,” she says.