How Danny Murphy’s dog Tank ended up in our house

Posted by: Bulletin Editor October 2, 2014 Comments Off on How Danny Murphy’s dog Tank ended up in our house

When Danny Murphy passed away last month, his many local friends were bereft. But most of all, his beloved black 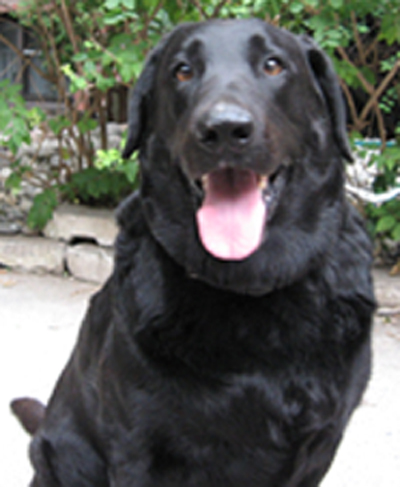 Tank, the every-popular icon of the LCBO store across from the Market.

Labrador retriever, Tank, was frantic over the loss.

Tank was as well known as Danny and had perhaps hundreds of fans who, over the past few years, accompanied Danny in his daily task of selling street newspapers in front of the liquor store on Front Street just across Market St. from the Market.

Scores of calls to Toronto Animal Services offered to either adopt or to suggest someone they know would adopt Tank. One of the operators shared that she had heard so much about Tank it nearly seemed the topic of the majority of calls for several days.

But no one could adopt Tank until he had been in custody for 10 days. Finally at the very first moment when Tank could be adopted, I sent our publisher (and now Tank’s mother) Paulette to adopt him for us and keep him in his turf.

First-come, first-serve (so long as the first to come was qualified to adopt). We live in St. Lawrence Neighbourhood and Tank is a local dog. It was only fair to keep him in our ‘hood.

Paulette and I already are owned by The Bulletin’s art critic, Daisy, who came from Toronto Humane Society about five years ago, so we were fully qualified and were first in line. We brought Tank home with us. 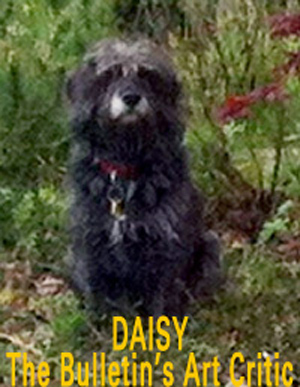 (Several years ago we had Daisy’s DNA done and learned that she is among the rarest of rare purebreds known as a Loud-barking-mustachioed-cocker-bagel. So rare that she is the only one of her species which is cobbled together with a bit of cocker spaniel, beagle and other non-descript genetic stuff.)

Accompanying Paulette in this legal dog-knapping mission to Animal Services was Kevin Scrimshaw, a long-time ally of Danny’s who has two dogs of his own, including Monty, a Bassett hound who is Tank’s best friend. Kevin also baby-sits a third canine.

Kevin and Monty live across the street from us so Tank is slowly adapting to staying in our home. The presence of the odd biscuit upon his entry has sharpened his enthusiasm for visiting with us and next weekend we’re taking him to the cottage.

After that, Kevin will only have him on occasions as Tank settles into our dietary regimen. Tank has a bit of flabbiness that doesn’t help his hips which cause him some discomfort. Given all the flights of stairs in our home, and in our cottage, Tank should be firming up soon.

But there’s more to that reducing diet than just feeding less. The trick we learned from a nurse who had a dog that, after surgery gained excess weight, is to boil some frozen green beans and then add some to the kibble, reducing the kibble by that amount. The overweight dog gets to eat the same amount, so it’s a reducing diet without the discomfort of dieting.

And that’s the story. I didn’t really want to disclose it but Danny and Tank were so much a feature of our neighbourhood, our Market and (yes) our LCBO outlet that it was impossible to keep it a secret because everybody, it seems, knows Tank.

“Is that Tank?” people ask as they walk over to him and he greets each person. He’s a people dog.

He and Daisy have that very much in common.