Posted by: Bulletin News May 12, 2017 Comments Off on Order of Canada welcomes new Toronto members 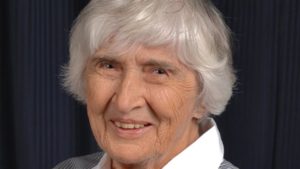 Marguerite Anderson has been named a Member of the Order of Canada.

His Excellency the Right Honourable David Johnston, Governor General of Canada, invested ten Toronto residents as Members (C.M.) of the Order of Canada during a ceremony at Rideau Hall on May 12.

As the co-founder and president of Environics Research, one of Canada’s first survey research companies, Toronto resident Michael Adams has shed light on our opinions and values. His work has expanded our understanding of the way Canadians define themselves, particularly when compared to our neighbours to the south. Through his creation of the non-profit Environics Institute for Survey Research, he has also supported research into issues that are sometimes overlooked, including the experiences of Canada’s Aboriginal, Black and Muslim communities. He is also a well-known author and public commentator.

Through her masterful work, Toronto resident Marguerite Andersen has given a voice to women’s experiences in Canada. As a novelist, essayist and academic, she is dedicated to advancing the status of women’s studies, and has held the Chair in Women’s Studies at both Concordia and Mount Saint Vincent universities. Among her influential publications, Mother Was Not a Person is considered the first feminist anthology of the Canadian woman’s experience. As director of the journal Virages, the only Canadian French-language literary journal outside of Quebec, she has also helped to promote the evolution of Francophone literature in Canada.

Peter Bregg‘s photographs have captured and illuminated some of the most memorable moments of the last five decades. In such roles as chief photographer for Maclean’s magazine, the Toronto resident has covered events as diverse as Terry Fox’s funeral and the September 2001 terror attacks on the World Trade Center. In addition, he donates his time and photos to support a number of charitable organizations, such as the international development groups ORBIS and WaterAid.

A committed philanthropist, Michael David Dan—a Toronto resident and O.Ont— is a model of social responsibility and generosity. A former neurosurgeon, he created the Paloma Foundation to fund organizations that assist marginalized people in Toronto. Dedicated to Canada’s Aboriginal community, he has created opportunities for future generations by supporting businesses on reserves. Recently, he also endowed the Waakebiness-Bryce Institute for Indigenous Health at the University of Toronto, the first privately-endowed research institute in the world geared to the unique health needs of Aboriginal people.

William Downe of Toronto is committed to enhancing diversity and inclusion. He is the chief executive officer of BMO Financial Group, an organization that has been recognized as a model of inclusivity. His strong belief in philanthropy has permeated the culture of the firm to the benefit of the financial industry and the many charities it supports. A strong supporter of education and health care, he dedicates time and energy to institutions such as the University of Toronto, St. Michael’s Hospital, and United Way Toronto and York Region.

Compassionate and steadfast, Toronto’s Steve Lurie has made a significant difference in how Canadians view and understand mental illness. As executive director of the Toronto branch of the Canadian Mental Health Association, he has helped transform this grassroots organization into a leading provider of effective, community-based mental health services that include housing, employment and peer support. He is highly respected nationally as a scholar and advocate for improved access to and funding for mental health care, and the empowerment of people living with mental illness and their families.

A revolutionary business thinker, Toronto resident Roger L. Martin has changed the face of management education internationally. As dean of the Rotman School of Management, he expanded its international reputation by piloting an innovative education model based on the concept of integrative thinking. His model emphasizes the use of opposing ideas to create better solutions, blurring the lines between business disciplines. He is an influential author of several books on issues related to business strategy, the future of democratic capitalism and global competitiveness, and is a trusted strategic advisor to governments and corporate leaders.

Kent Roach has made outstanding contributions to protecting our civil liberties. A long-time professor at the University of Toronto, he is also a skilled litigator who has participated in some of the most significant Charter rights cases of the last few decades. His far-reaching involvement in social justice has spanned forums as diverse as the Ipperwash, Arar and Air India inquiries, as well as the Truth and Reconciliation Commission. In recent years, he has also emerged as a leading figure in counterterrorism studies whose voice is among the most influential in contemporary debates on the limits of security.

David Vaver is Canada’s preeminent scholar of intellectual property law. A professor at Osgoode Hall, professor emeritus at Oxford University, and the former director of the Oxford Intellectual Property Research Centre, he has improved society’s ability to contend with the legal implications of technological change. He is relied on by the courts for the balance that his work strikes between the rights of intellectual property holders and users, and he has served as an advisor to governments around the world seeking to modernize their intellectual property regimes.

The Honourable Howard Wetston Q.C. of Toronto has been a transformative leader in Canada’s public service. Rising from humble beginnings, he trained as a lawyer and rose to the position of federal court judge. His inspiring leadership led him to make a lasting impact in a wide range of senior public service roles, both provincially and federally. Notably, as chair of the Ontario Securities Commission, he is lauded for having reinforced Canadian securities safeguards. He has also campaigned strongly for the transformation of Canadian business practice to be more inclusive of women in senior management.