‘Obvious choice’ in naming Corktown Common wins him a picture

Posted by: Bulletin Editor August 17, 2014 Comments Off on ‘Obvious choice’ in naming Corktown Common wins him a picture 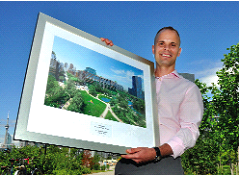 Tedd Konya just did what he thought was right when he submitted the name Corktown Common in the contest to name the new 18-acre park next to the Don River.

“I was shocked that I was the only one that came up with the name Corktown,” Konya said at a July 10 ceremony to officially open the $26.5 million green space. “To me it was the obvious choice for the naming.”

Konya, a Corktowner, won the naming contest and was given a framed, colour photograph of the park when dignitaries met to cut the ribbon. “I love the park. I come here with my kids. They love the splash pad and the playground. My dog likes to walk through here,” he said.

Corktown got its name from the Irish who immigrated to Canada from the County of Cork in Ireland in the 1800s and settled near Parliament and King.

Area Councillor Pam McConnell said the park was a long time in the making and thanked the local community, Ottawa, Queens Park and the city for making it happen.

“It needed persistence by our community and it needed money from our orders of government. This is an amazing piece of infrastructure, this engineering,” she said.

As well as providing recreational space, the park (a Waterfront Toronto project) protects Toronto’s eastern downtown from flooding. For years it remained an abandoned, post-industrial site.

Cynthia Wilkey, chair of the West Don Lands Committee, said Corktown Common is the fruition of a dream. “One of our top priorities was to create a beautiful park that would provide respite from the hard-edged character of the city core and restore a naturalized connection to the Don River,” Wilkey said.

She said The Friends of Corktown Common has been formed to help the city with maintaining and programming the park.

Development of the park was carried out with the Toronto and Region Conservation Authority. An on-site pavilion has solar panels to supplement the park’s power needs.

Previous: Andrew Ranger moves up in standings with top-5 score
Next: War on Christians in Iraq, Syria paves way for clash of civilizations